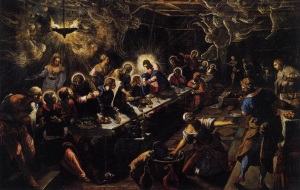 Compared with the weekend days we had spent in Venice so far, waking up to the city on a Monday was a quite different experience. Suddenly, canals which had previously been so quiet, hosting only a lone gondola or two, had suddenly become bustling with working people. It was captivating to watch how Venice came alive, not just as a tourist funfair, but also as a living city with the practical needs and commercial transactions that go with it. So, for example, I whiled away many a minute at the beginning of this day watching a post delivery boat in the canal below our room offloading large parcels onto the quayside, as well as a rubbish boat a few canals down, loading the weekend’s refuse onto its bobbing timbers. It was fascinating to note (although I suppose the thought should have been obvious) that in Venice everything really does come and go via water – a city intrinsically married to the transient milieu which surrounds it. 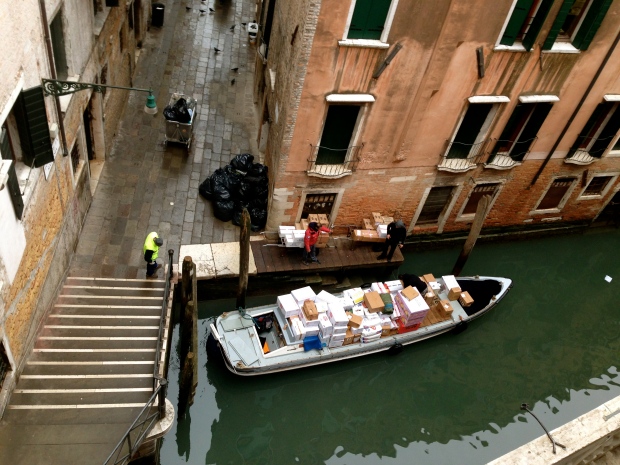 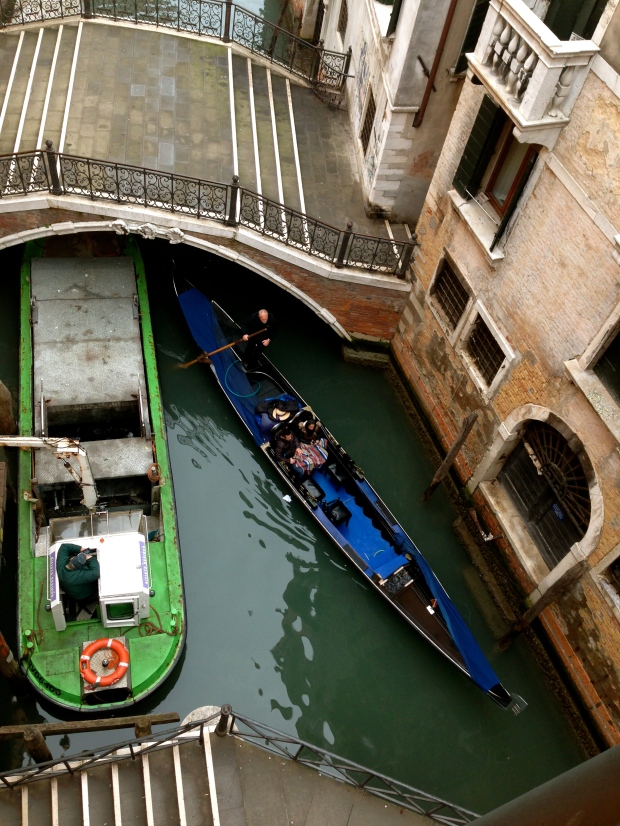 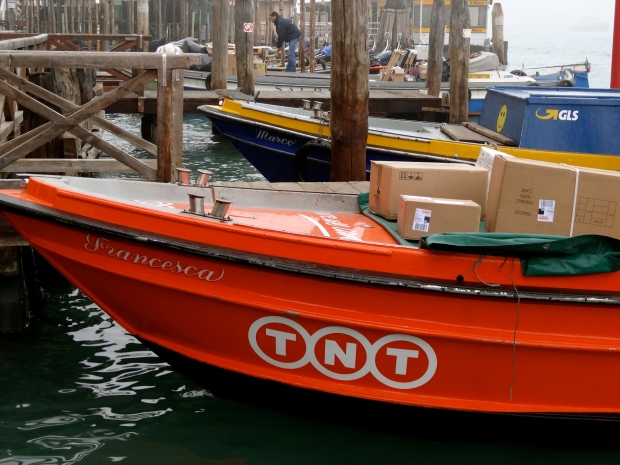 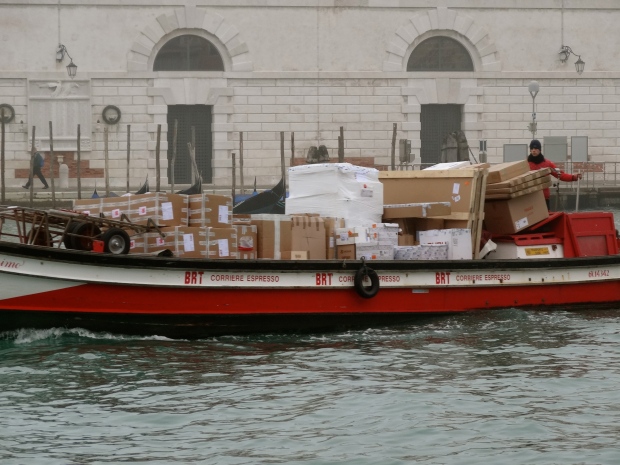 But we didn’t have time to stop and stare for too long, no matter how tempting that may have been. We had art on the mind – something which comes easily in a city whose historical relationship with art was so strong that today the small island has become an abundant treasure trove of art historical treasures. And no where on the island can you see such a spread of these artistic riches than in the city’s primary gallery, the Gallerie dell’Accademia.

I vividly remember visiting the gallery on what was probably the first day of my art history course in 2001. Our teacher, Grant (“Grantus”) took us into the first main gallery there and sat us on the floor amongst panel after panel of glinting gilded altarpiece paintings. There he took out of his pocket what looked to be a sheet of gold and, like a magician, threw the gold up into the air letting it flutter into our hands. This demonstration served as a introduction to the lavishness of Venetian art, from the gold leaf which adorned the background of these pre-renaissance altar pieces, to the scale and astonishing execution of some of the greater works which came later.

Veronese, Feast at the House of Levi

Back in 2013, and the Accademia continued to captivate me as it had 12 years before. For who could not be entranced and knocked back a little by the vast masterpiece, Feast at the House of Levi by Veronese. Originally entitled The Last Supper, Veronese had been forced to change the name when the painting, which shows the traditional Last Supper set-up surrounded by all manner of musicians, actors, animals and various unsavouries, attracted the attention of the Roman Catholic Inquisition. The inquisition called Veronese to answer for what they considered to be the “irreverence and indecorum” of including within the scene depicting Christ and his Apostles a band of “buffoons, drunken Germans, dwarfs and other such scurrilities”. Thanks mainly to the support of Venetian authorities, the painting was saved – but the name changed. And here it hangs to be widely admired today, alongside other brilliant masterpieces – amongst my favourites Bellini’s Madonna of the Red Cherubs, which looks almost futuristic with those surreal blood red cherubs behind her, Antonio Rosso’s Madonna Enthroned, and Giambattista Cima da Conegliano’s Lion of Saint Mark. 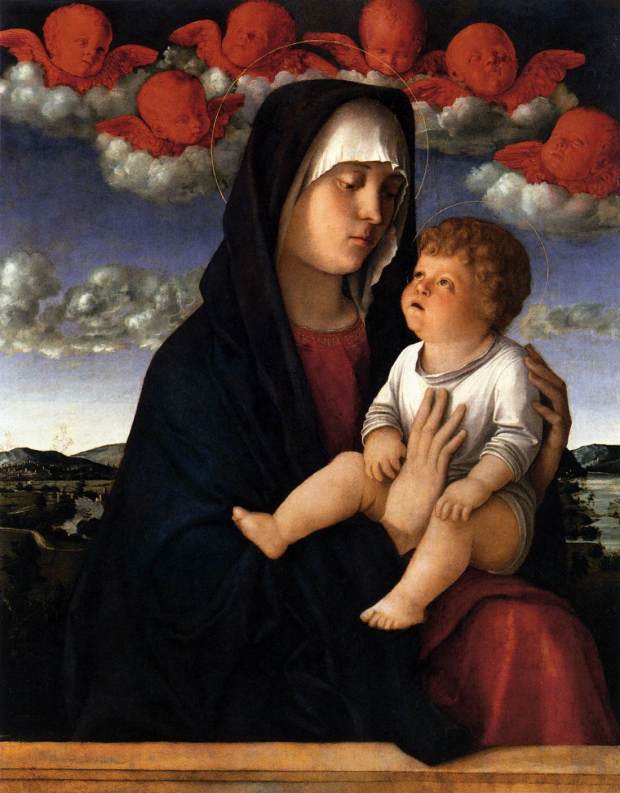 Bellini, Madonna of the Red Cherbubs 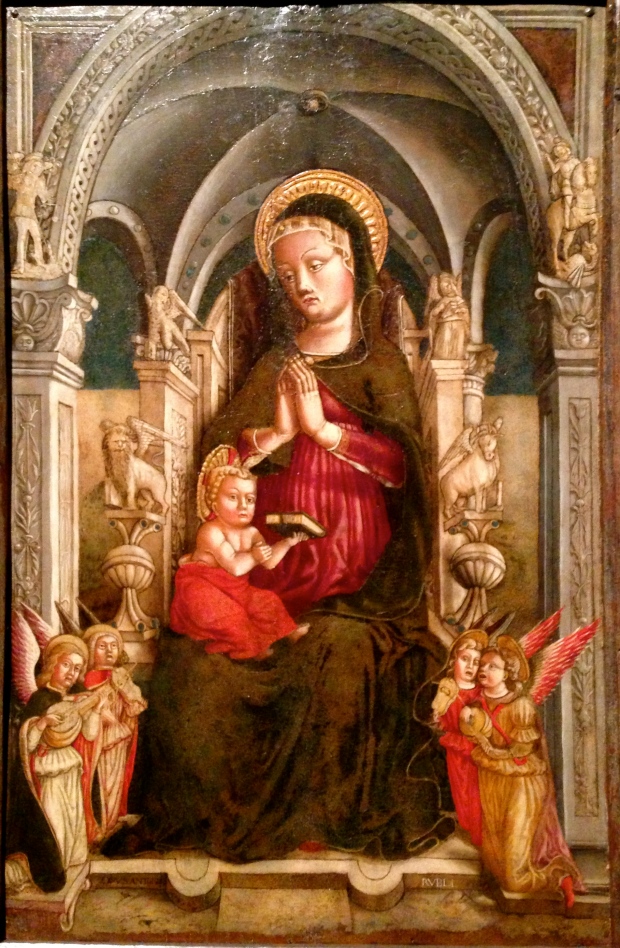 However, my favourite work of all continues to be St Mark’s Body Brought to Venice by Venetian supremo, Tintoretto. With its ephemeral light and whispish ghostly forms over on the left of the canvas, as well as its moody blood red sky and dramatically shadowed body of St Mark, the painting demonstrates, to my mind, modernity beyond its time (Tintoretto painted it in 1548). It could easily be mistaken for a surreal masterpiece by Salvador Dali, and you can see the influence of Tintoretto in artists who came later, like Spain’s El Greco with his looser, dramatically coloured figures.

But as we were to discover, the handful of Tintoretto’s on show at the Accademia would only scratch the surface of the Tintoretto treasure trove to be found in Venice. And to discover to what extent Venice lavished upon this artistic supremo, and just how much Tintoretto painted in return, one has to visit the mind-bogglingly beautiful salas of the Scuola Grande di San Rocco, where we headed that afternoon (We did so after a pizza in a slightly dodgy looking tourist pizzeria near the Rialto Bridge. With a view that good, I didn’t think the food would be up to much but we were pleasantly surprised – a perfectly crispy pizza base munched over an unbeatable view: Priceless).

Lunch with a view… 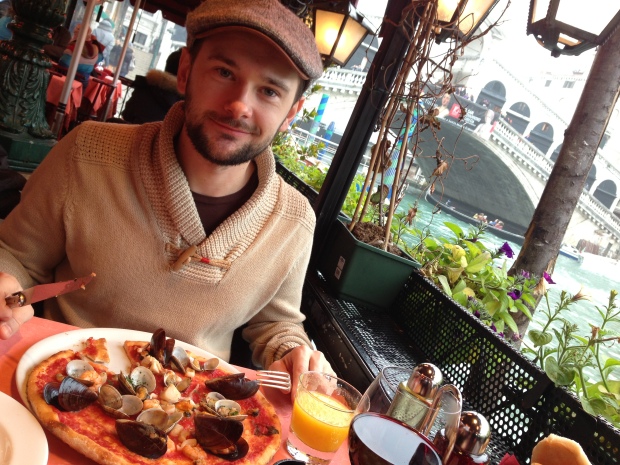 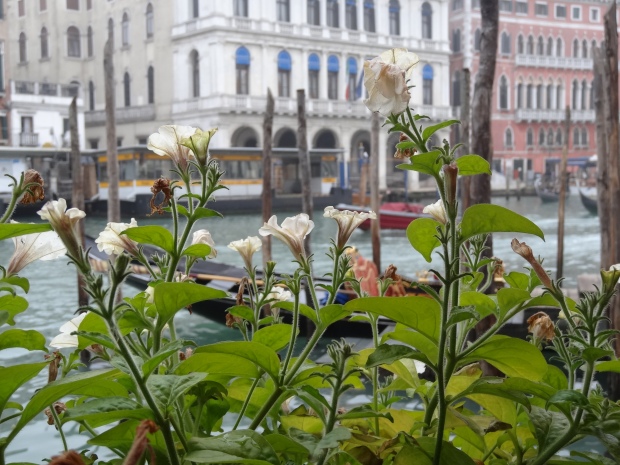 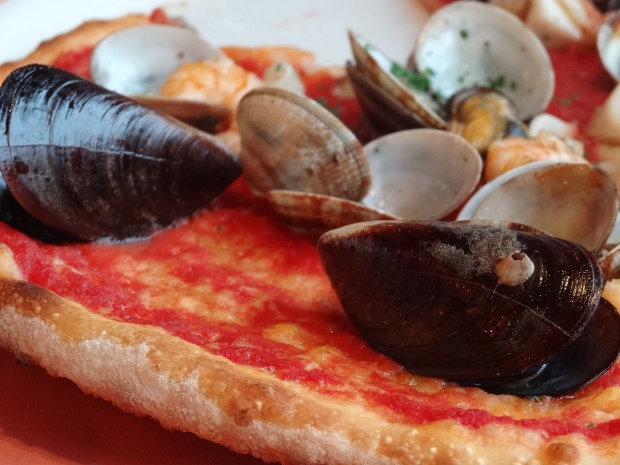 Between 1565 and 1567 and again from 1575 to 1588, Tintoretto, in an incredibly prolific bout of creativity, painted some 50 masterpieces to cover the walls and sensationally gilded ceiling of the new showcase palace of the Confraternity of St Roch. The cycles, dealing with both old testament stories as well as the birth and life of Christ (culminating in a huge crucifixion masterpiece) are startling in their action packed illustrations of these well-known stories, demonstrating more than ever before Tintoretto’s brilliant dexterity when it came to perspective and light, as well as his ability to paint effectively on a monumental scale. 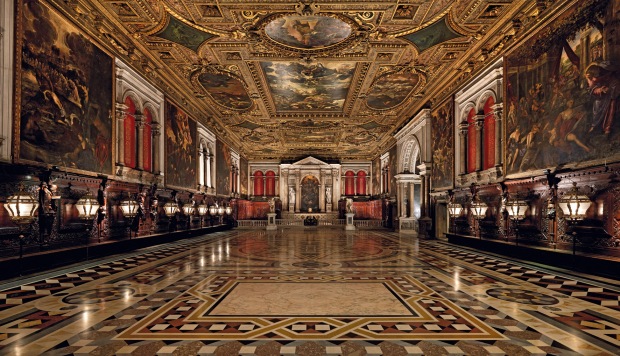 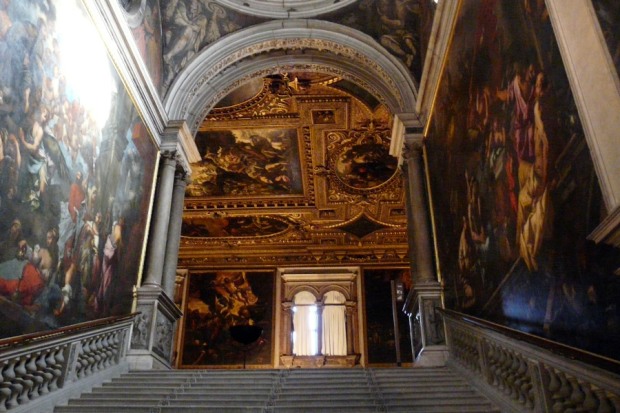 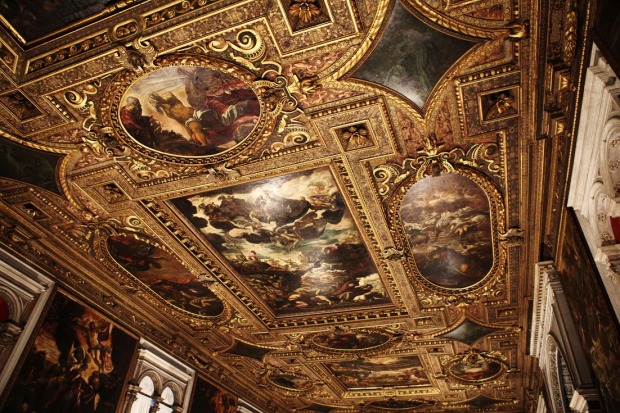 There was so much to look at in the Scuola, from the sensational wood carved panelling along the walls, and the incredibly opulent gold ceiling and grand staircase leading up to this first floor paradise, that the Tintoretto’s could easily have become second fiddle to the general sensation which one feels when entering the room. Nonetheless, you want to spend at least 10 minutes concentrating on each of Tintoretto’s masterpieces, but soon realise that were you to give them such time, you would remain in the place for a whole day. And so eventually we had to drag ourselves away, leaving the Scuola Grande with such a sense of awe that the previous day’s exploration of all this golden and glamourous had just reached absolute overdrive. 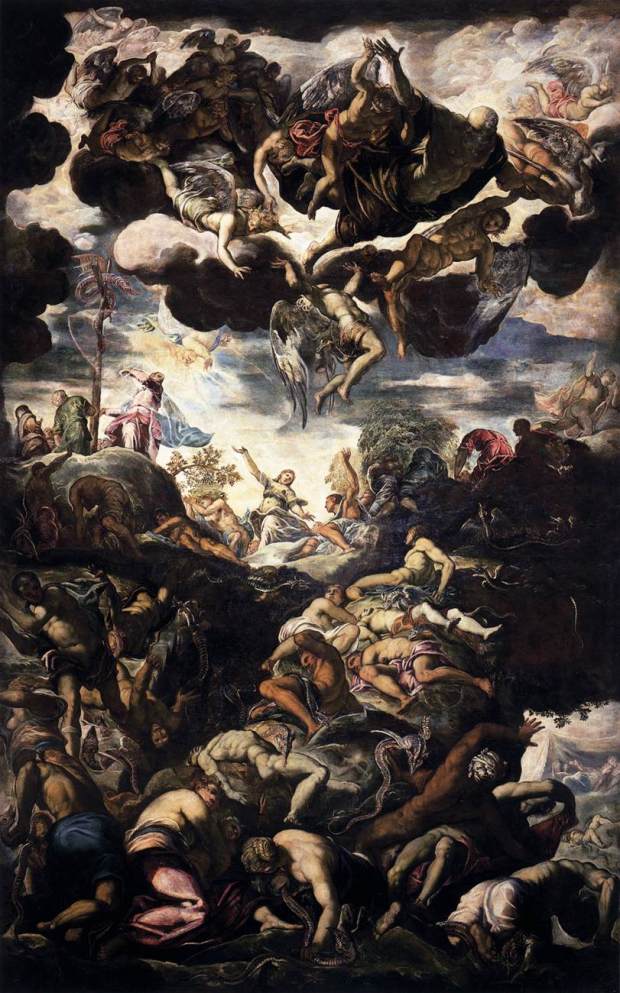 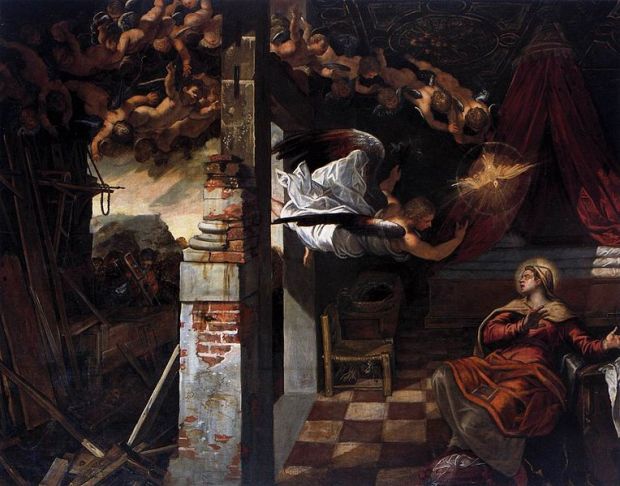 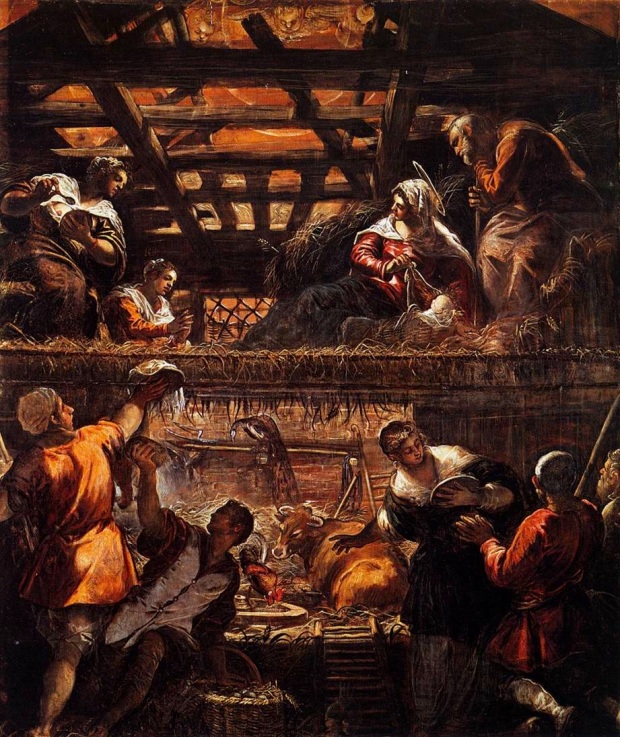 Tintoretto Cycle, The Adoration of the Shepherds 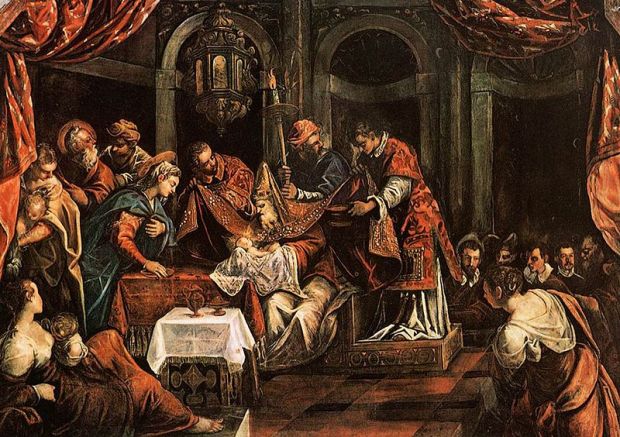 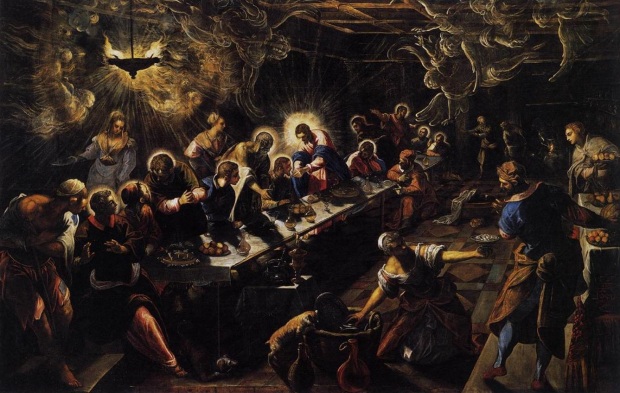 Exhausted by the efforts of trying to take all this golden glory in, we retreated happily to the Campo San Giacomo dell’Orio where, in the Bar “Al Prosecco” we treated ourselves to two very delectable glasses of “surlie” prosecco – a cloudy variety which allegedly results from the lack of chemicals in this purer form of the drink – which makes you wonder just what chemicals go into the more traditional clear version of the bubbly drink! With these two glasses clinked before the Christmas-twinkling scene before us, we toasted our trip to Venice. For the next day, we were heading south. To Rome. 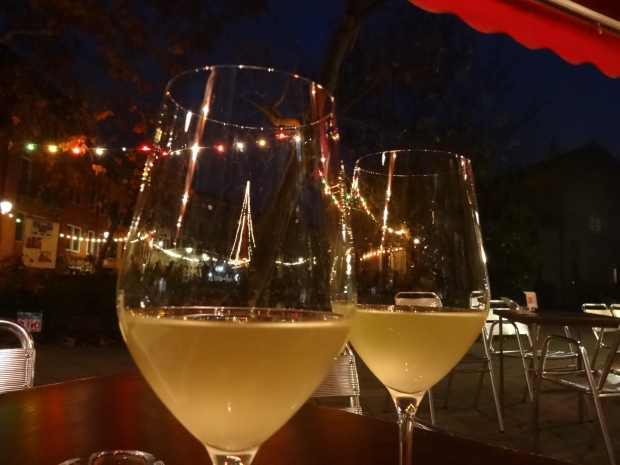