With 4 days left to go until my exhibition, I wanted to take you to sunnier climes in exploring some of the collection which will be on display as my work goes on show at The Strand Gallery, albeit not necessarily calmer times. For in painting the first of what was to become a comprehensive series of works based on my most beloved of countries, Spain, I reached back into history for inspiration, and more particularly to one of the most turbulent periods of Spanish history – the Spanish Civil War of 1936-9.

The Spanish Civil War has been somewhat overlooked in the typical school’s history curriculum in favour of the more wide reaching first and second world wars. It was perhaps for this reason that I became so engrossed in the story of the war when I first started reading about it during my post-accident convalescence in 2009. Of course I was well aware that the war had happened, but knew nothing of the shocking details which meant that only a little over 70 years before, the country which today seems such a calm sanctuary of beach tourism and a hotbed of cultural highlights, was ravaged by one of the most severe wars in history. And what made the war even more shocking to my mind was the fact that it had seen one Spaniard turn against another, families literally split in two and generations of friends turn in on one another. Here there was not the kind of national solidarity which comes of an entire nation being invaded by an external aggressor, but a country made cannibal, turning in on itself. 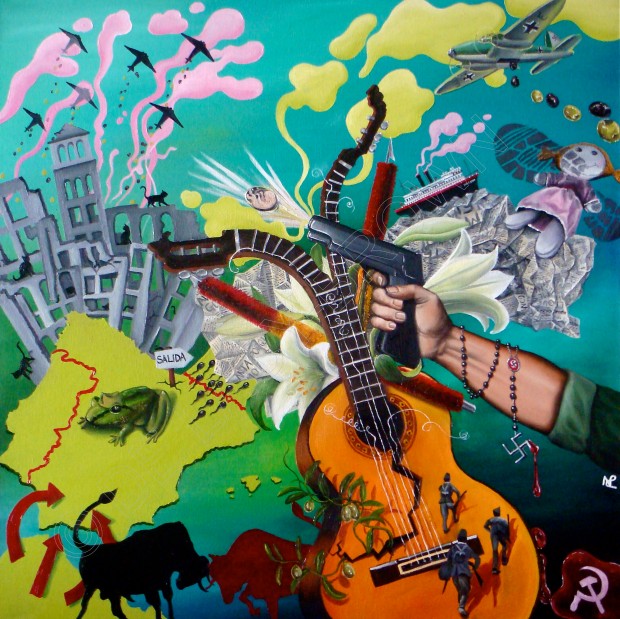 The more I read about the war, the more engrossed I became, and it was only a matter of time before an image started to emerge in my head for a painting depicting the conflict. So taking a 90cm x 90cm canvas, I set about painting what was to initiate an entire series of Spanish paintings, this one showing the country at its lowest ebb. From the Spanish guitar shown split at the painting’s centre as a symbol of Franco’s attack on the Andaluz gypsy culture, and the bombings of the innocent down of Guernica, to the imprint of a soldier’s show trod across an abandoned doll, symbol of the total disregard for innocent lives, even children’s – this painting contains all of the ingredients which made the Spanish Civil War so shocking to me.

And yet despite the somewhat grim tale it portrays, the work remains one of my favourite paintings, and hangs in prime position above my bed, where it has remained since it was first created. Should I sell the work at my forthcoming Strand Gallery show, it will be a hard one to part from.