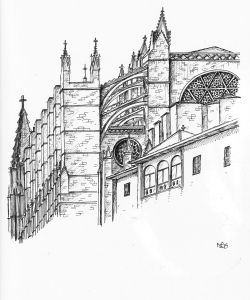 Having noticed a considerable period of many months passing during which my travel, and now Mallorca, sketchbook played no active role in my life, I have made a conscious effort to reopen and reinstall my sketchbook’s regular participation in my weekly artistic activities. The result is that my sketchbook is once again travelling outside of my art studio as a kind of regular escort to my journeys across Mallorca and indeed closer to home.

Most recently, a little stroll just round the corner from my apartment provided sufficient inspiration to generate a new sketch in my sketchbook. It’s not hard – after all, I do live in one of the most indisputably beautiful cities in Europe, and the old town of Palma de Mallorca is a true gem in every sense. Best of all, I am but 5 minutes walk from La Seu, the city’s mighty gothic cathedral which is so relentlessly beautiful that it could be sketched from every one of its 360 surrounding angels. 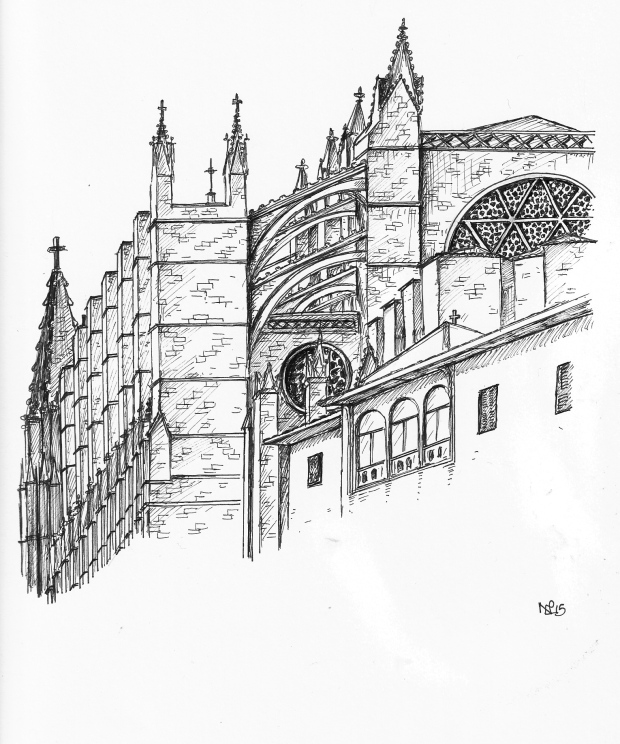 On this occasion, taking a seat in the leafy Parc de la Mar sandwiched between the sea and the cathedral, I took refuge in the shade, opening my sketchbook and making this quick pen sketch of the back of La Seu. True, it is but a small portion of a glorious bigger spectacle, but I have no doubt that this magnificent building will reappear in its full glory in my sketchbook soon.

Leave a Reply to Becky | Been There, Seen That, Got the Postcard Cancel reply