On the Sixth day of Christmas, my Normy gave to me…

Now Normette would be the first to admit that her presents from Normy haven’t exactly been a huge success so far. The Norm-pear tree was pretty good, albeit that it takes a lot of watering and doesn’t survive at all well in this chilly weather, oh and the partridge perched in it keeps on attempting to peck at the baby Norms; then there were the two turtle-doves who wouldn’t fly or fit in a dove cot; the three French hens were awfully chic but ever so demanding, and as for the four colly birds – by the time they had flown from their pie, shocked the guests and splattered gravy all over Normette’s living room, they then proved a devil to catch. And perhaps it’s better not to mention the five gold rings, one of which caused an irrevocable breakdown in Normette’s trust for Normy (despite his later protestations that the fifth ring was presented in homage to the carol, and not intended for another lover!). Despite all of this, when the sixth day of Christmas came, Normette was rather looking forward to receiving another gift, and Normy saw it as an opportunity to redeem himself.

Imagine their shock then when no present turned up! Let me explain… Next on the list in The Twelve Days of Christmas are the six geese a-laying. In pursuit of six egg-laying geese, Normy called his local farmer and explained what he wanted. Farmer Norm noted down the order, but was rather busy skinning some Turkeys for a mountain of Christmas orders, so he passed on the order to 6 geese on his farm explaining what Normy wanted.

Now geese are not the cleverest of birds, and when they saw that Normy wanted “six geese a-laying”, they assumed he wanted six geese lying down. Now “lay” is the past tense of “lie”, so it’s not altogether surprising that they made this obvious grammatical mistake, especially as geese are not that used to reading… Anyway, the geese, being something of a group of opportunists, decided that since they were expected to present themselves lying down, they may as well do it somewhere nice. And seeing as Normy had already sent payment to the farmer for the geese, the very same pesky birds decided to take the cash and book themselves the first available flights to a location where lying back would be enjoyable.

And so, while the six geese should have been a-laying big eggs in Normette’s backyard, where do you think they ended up? Why, lying back having a splendid time on a beach in the caribbean, and not an egg or nest in sight! 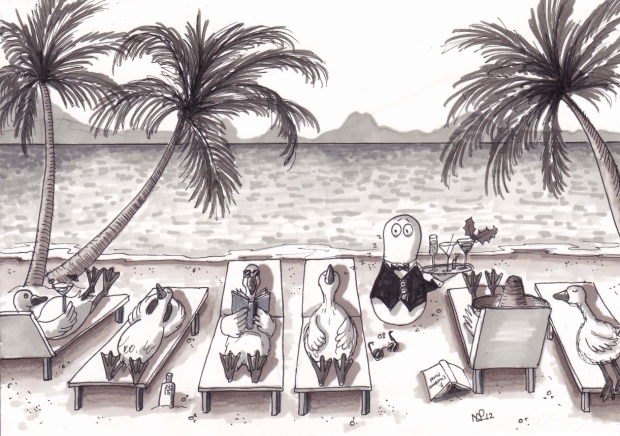 On the Sixth day of Christmas my Normy gave to me six geese a-laying (2012 © Nicholas de Lacy-Brown, pen on paper)

Poor Normy. Poor Normette. Let’s cross our fingers and hope that Normy has better luck on the Seventh day of Christmas…