My Granada Sketchbook: Alhambra, viewed from the Albayzín

I have just returned from Andalucia in Southern Spain. It’s an annual pilgrimage to a place which inspires me deep from within its passionately romantic soul. While the old town of Marbella, in a house radiated by the fragrant perfume of jasmine, is always my base, each year I try to embellish my trip with a sampling of the region’s rich cultural offerings. This year it was the turn of Granada, a true jewel of the Iberian Peninsula, a city so rich in cultural and religious heritage that from one street to another you find yourself whisked across different centuries and richly divergent cultures.

A combination of 4 nights in Granada followed by 12 in Marbella meant for a trip front-loaded by inspirational madness, and a fortnight which then provided ample opportunity to live out the fruit of those ideas. This meant that my trusty sketchbook went with me not just in Granada, where I would sketch sat in shady plazas, and in the echoing gardens of the Alhambra, but also in Marbella, where every morning I got into the habit of finishing off my Granada sketches over a rich coffee and a slice of spongy bizchoco. 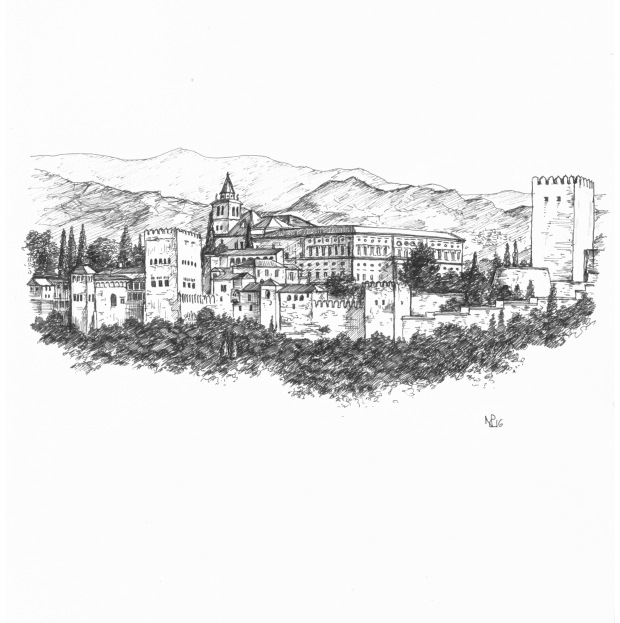 Today, I considered this sketch to be the best way to start my Granada tales, for it shows perhaps the most famous Granada view – the stunning Alhambra palace as viewed from the Mirador de San Nicolas, with the might of the Sierra mountains behind it. I’m not going to talk too much about the Alhambra for now… that time will surely arise as I share my Granada adventure with you. But for now I hope you enjoy this first of 9 works created on this very inspirational trip. I look forward to sharing them all with you.