Despite their curving frame and voluptuous figures, Norms are far from kinky, and they don’t really go for crass language, vulgar innuendo, or sexy lingerie either. So for these rather morose little figures, the Piazza Bra in Verona had nothing of the connotations which would get some tourists giggling. Rather, this impressive open space surrounding the most iconic of all Verona’s monuments – the ancient Roman arena – was seen by the Norms as nothing more or less than the momentously impressive piazza it is. 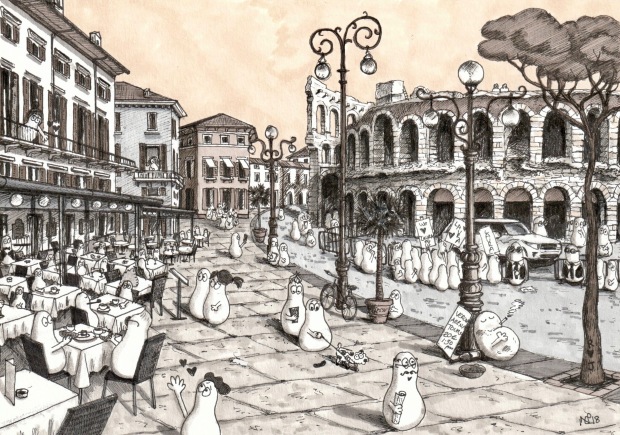 With the Arena behind them, and a plate of croissants, brioches and other delicacies on a table in front of them, the Norms considered that there was simply no better place than this sweeping circular square to take a coffee, enjoy a sunny breakfast and watch the world go by. It’s why they returned to the Piazza Bra for their breakfast everyday as a perfect launch pad from which to enjoy this city of wonders. And they weren’t the only ones…as the pop star fans, the Romeo and Juliet, the morning dog walkers, the loved up couples, the stern bodyguards and the tourists aplenty in this sketch will tell you. See if you can spot them all 🙂