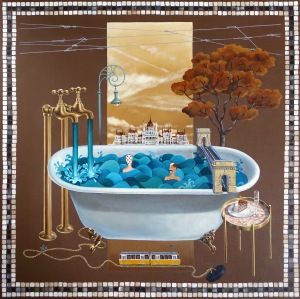 Funnily enough, I was inspired to paint Budapest by our hotel bathroom. Simple, understated but insuperably elegant, the bathroom of the Callas House boutique hotel featured beautiful gold fittings offset against a floor of black and white marble mosaic tiles, and a basin whose lines exuded sheer classicism. That simple bathroom exemplified for me European elegance, and a painting started to form in my mind. As the image developed, it became more and more appropriate as an image representing Budapest. For the Hungarian capital is one of the great spa cities of Europe. And as we were to find out from a visit to the famous Gellért Baths, the locals benefit from the health-giving qualities of mineral rich naturally heated waters around which an industry of bathing has developed over the centuries.

As these factors combined, the bath became the central symbol in my painting of Budapest, featured on this post. The mineralised waters of the city are enjoyed by two bathers, while the board which traditionally crosses over a vintage bath is replaced by the iconic Chain Bridge that crosses the Danube. There too, a sparkling afternoon is on standby for he who most indulges, behind which a leafy tree represents the elegant city boulevards, offset against the famous Parliament building subsisting in a dreamy golden landscape. Finally tram cables and the tram itself encapsulates the very European spirit which fills the city.

And of course, to frame it all, I had to paint those little black and white tiles, all the way from the bathroom floor in the little elegant hotel room which inspired this work.