Semana Santa – inspiration for my art

Yesterday, I introduced you to the endlessly fascinating and enduringly captivating Spanish processions which run through the streets of countless Spanish towns during this special week, Semana Santa, approaching Easter Sunday. From the moment I first saw one of these processions, I was overwhelmed by the spectacle. On the one hand, the hooded figures, marching by candlelight besides a wax figure of a dead or dying Christ make for a disturbing, slightly sinister sight. But look beyond the costume, to the breadth of participants involved, and to the widespread interaction of all of Spanish society which comes out to see the processions, and one is filled with an overwhelming sense of warmth and emotion. All of this combined makes for a substantial source of inspiration, and it is for this reason that Semana Santa has cropped up in my art work so often. I’ve now featured the parades in four of my major works and several smaller works. Nonetheless, I still don’t feel like I have truly captured the sheer scale and wonder of the spectacle, but hope that one day I will create a piece with which I can be truly satisfied. 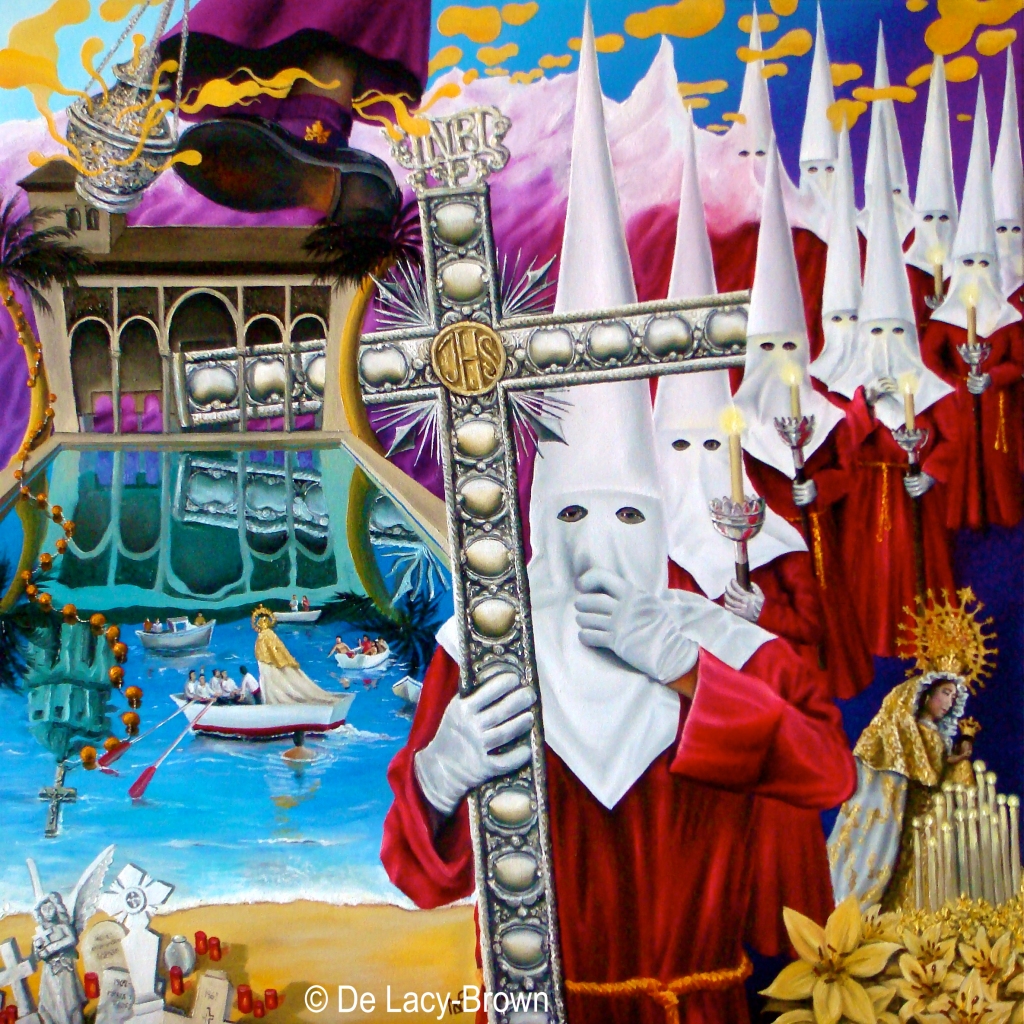 In this, the second canvas from my España Volver collection, Catholicism, Catholicism,  the Semana Santa processions forms the centrepiece of what is a generalised depiction of the continuing importance of Catholicism in Spain’s current culture, as well as its historical significance. Here the nazareños are shown metamorphosing from the Sierra mountains behind the city of Granada, the site of one of Catholicism’s most significant defeats over Muslim rule during the reconquista. To the right of the nazareños is a typical statue of Mary as paraded through the streets on tronos. This is not to be confused with the Mary sent out to sea by fishermen as depicted on the left on the canvas, this detail depicting the festival of Maria del Carmen, whereupon fishermen across the Costa del Sol give thanks to Mary for keeping them safe every July.

My depiction of Semana Santa in Catholicism, Catholicism was in turn based upon this study I made a few months before of a group of nazareños during Marbella’s Domingo de Ramos (palm sunday) procession.

It surprises me that so few people outside of Spain actually know what these processions are. When most English people see my paintings, they think I’ve portrayed the Ku Klux Klan – as if. This observation causes me relentless frustration, and I hope that through my art, photography and now my blog, I can help to share Spain’s Easter spectacles around the world.

That’s all for now. But check The Daily Norm this Easter Sunday, where a special Sunday Supplement will feature my most substantial (and recent) depiction of Semana Santa.

Seville: The city which inspired the painting

Key to understanding the Seville Triptych I painted, as featured on yesterday’s Sunday Supplement, is the city which inspired it. While I’m sat on a plane (and hopefully not stuck in an airport with snow-induced delays) I’m posting in advance the photos I took of Seville, the star of Spain’s south and one of the most sensational cities I have ever visited. Now all you need is a bottle of rioja, some chorizo tapas and flamenco on CD and winter will be dismissed for good! Enjoy.

Ceramic dome and the square below

Moorish details of islamic architecture in the Real Alcazar

Slender palms and modernist signage in the Parque Maria Luisa

Gardens of the Real Alcazar

Typical cityscape with Giralda and plams

The original high-rise – the interior of the Catedral

Reflected image of the Real Alcazar in one of its pools

Catedral seen through an arch of the nearby Alcazar

Blossom in the Parque Maria Luisa

Wall and ceramics in the Plaza de España

Room with a view: The Real Alcazar

Catholicism: central to understanding the indomitable spirit of the city

Gate in the Real Alcazar gardens

Room with a view: this was the view from our hotel!

It’s an early 2012 Spanish Season here at the Daily Norm, and what better thoughts to fill your head at this time of ferocious cold across much of the Northern Hemisphere. Here in Spain the snow hasn’t reached us, but the winds were almighty and angry. On emerging from home yesterday we found much of Marbella’s lush greenery had hit the ground. A crying shame, but such is the rapid growth of the plants out here, I’m sure many of the gaps will have filled come July.

In line with this short season of Spanish indulgence, today’s Sunday Supplement pays homage to one of Andalucía’s most famous and exquisite cities: Seville. Having travelled there in the Spring of 2010 my mind rapidly filled with numerous ideas with all the energy of a kindergarten playground. What resulted was not one, not two, but three canvases portraying the city, which, when placed together flow seamlessly into one complete panegyric to Spain’s southern gem. 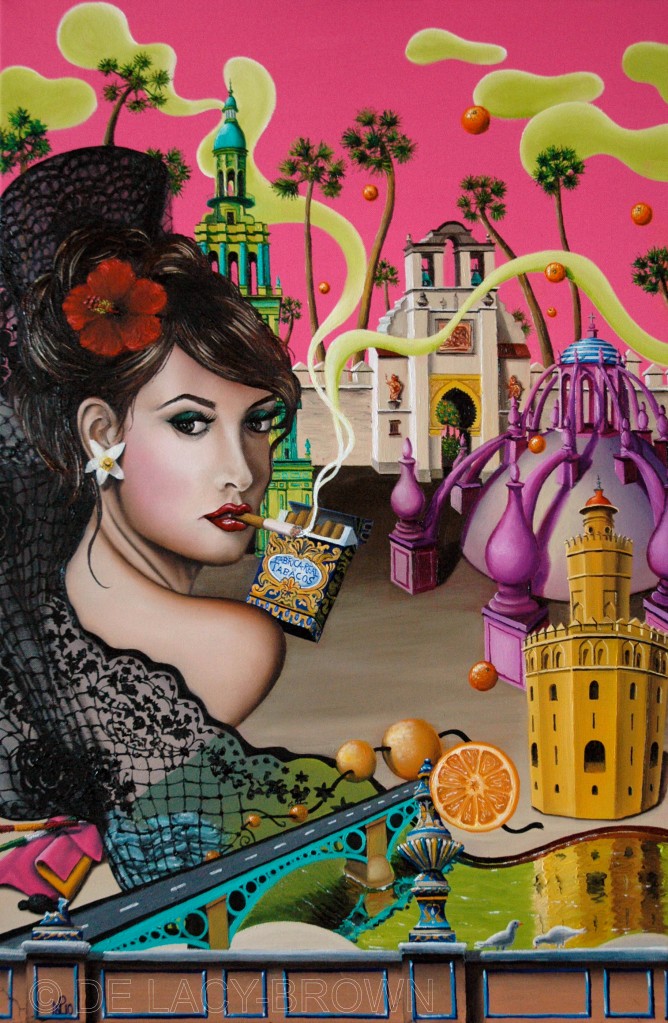 Prominent in the first canvas is a beautiful Spanish lady. Some asked if I had painted Amy Winehouse. Au contraire – this is the infamous Sevillian femme fatale, Carmen, immortalised in Bizet’s opera, seductive in her gaze, languidly smoking a cigarette from a packet which is decorated with the ceramic signage of the Tobacco factory where Carmen worked – a factory which today stands beautifully as ever in the centre of the city, now converted into a university. Beneath her traditional black lace mantilla which, in part, is used as a fisherman’s net, are the paraphernalia of the matador, Escamillo who, in Bizet’s operatic tale, prompted such jealousy in Carmen’s lover Don José that it led to her eventual downfall. Also in this canvas are the Moorish walls of Seville’s Real Alcazar palace, harping back to the city’s Moorish past, which is also embodied in the Torre del Oro which stands by Seville’s Guadalquivir river. Across the river, the bridge designed by Gustav Eiffel features, while from the fishing nets, floating buoys become the oranges for which Seville is renowned throughout the world. Meanwhile the flower from fragrant orange blossom adorns Carmen’s ear, while above her head, the architectural splendour of the ceramic-covered Plaza de España emerges. Finally, sat like a spider upon the ground, the elaborate gothic architecture of Seville’s great cathedral is featured in a vibrant purple. 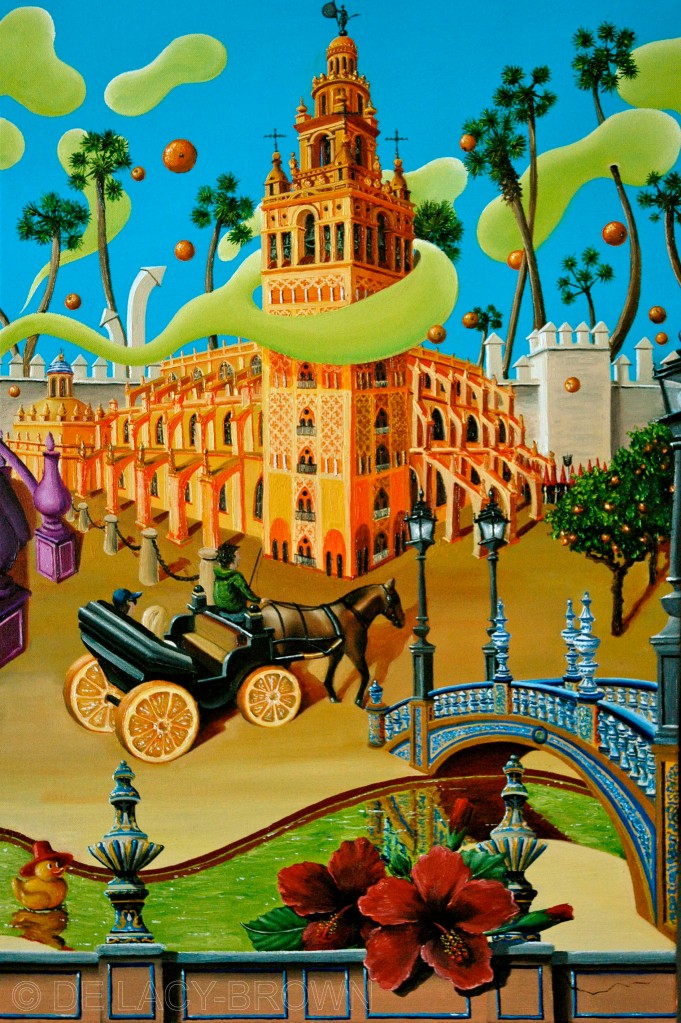 In the second canvas, the Giralda bell tower and the adjoining magnificent cathedral take centre stage, enveloped by the smoke of Carmen’s cigarette smoke. The angle of the building shows off its magnificent gothic details as well as the Moorish features on the lower section of the Giralda tower which is retained from Seville’s Moorish past. In front of the cathedral, a common site of Seville is featured – the horse and cart – whose characteristic yellow wheels are replaced with orange slices. Meanwhile, the distinctive blue and white ceramic bridge of the Plaza de España signifies that here, the river has become the pleasure lake which is central to the Plaza de España complex.

The third canvas is testament to Andalucía’s complex religious history, from the Moorish architecture which features strongly in the Real Alcazar palace, to the staunchly catholic Semana Santa (Easter Week) parades which are famous throughout Andalucía but most especially in Seville. In the foreground there is a decorative sign from the Parque Maria Luisa, which appears to emanate from the modernist age of design, while in the background, the pointed battlements of the Moorish city walls appear freed from the uniform constraints of their design, playfully reaching for the skies.

Across the three paintings, several unifying features dominate: In the immediate foreground are the walls and ceramic decorations of the Plaza de España, and behind it the River Guadalquivir which, in the second canvas becomes the pleasure pools of the Plaza de España and, by the third canvas, has turned into the Moorish pools of the Alcazar palace. In the background, the distinctive slender palm trees which pepper the cityscape and a shower of Seville oranges scatter the painting, while along the horizon, the walls of the Real Alcazar unify the canvas.