Semana Santa – inspiration for my art

Yesterday, I introduced you to the endlessly fascinating and enduringly captivating Spanish processions which run through the streets of countless Spanish towns during this special week, Semana Santa, approaching Easter Sunday. From the moment I first saw one of these processions, I was overwhelmed by the spectacle. On the one hand, the hooded figures, marching by candlelight besides a wax figure of a dead or dying Christ make for a disturbing, slightly sinister sight. But look beyond the costume, to the breadth of participants involved, and to the widespread interaction of all of Spanish society which comes out to see the processions, and one is filled with an overwhelming sense of warmth and emotion. All of this combined makes for a substantial source of inspiration, and it is for this reason that Semana Santa has cropped up in my art work so often. I’ve now featured the parades in four of my major works and several smaller works. Nonetheless, I still don’t feel like I have truly captured the sheer scale and wonder of the spectacle, but hope that one day I will create a piece with which I can be truly satisfied.

In this, the second canvas from my España Volver collection, Catholicism, Catholicism,  the Semana Santa processions forms the centrepiece of what is a generalised depiction of the continuing importance of Catholicism in Spain’s current culture, as well as its historical significance. Here the nazareños are shown metamorphosing from the Sierra mountains behind the city of Granada, the site of one of Catholicism’s most significant defeats over Muslim rule during the reconquista. To the right of the nazareños is a typical statue of Mary as paraded through the streets on tronos. This is not to be confused with the Mary sent out to sea by fishermen as depicted on the left on the canvas, this detail depicting the festival of Maria del Carmen, whereupon fishermen across the Costa del Sol give thanks to Mary for keeping them safe every July.

My depiction of Semana Santa in Catholicism, Catholicism was in turn based upon this study I made a few months before of a group of nazareños during Marbella’s Domingo de Ramos (palm sunday) procession. 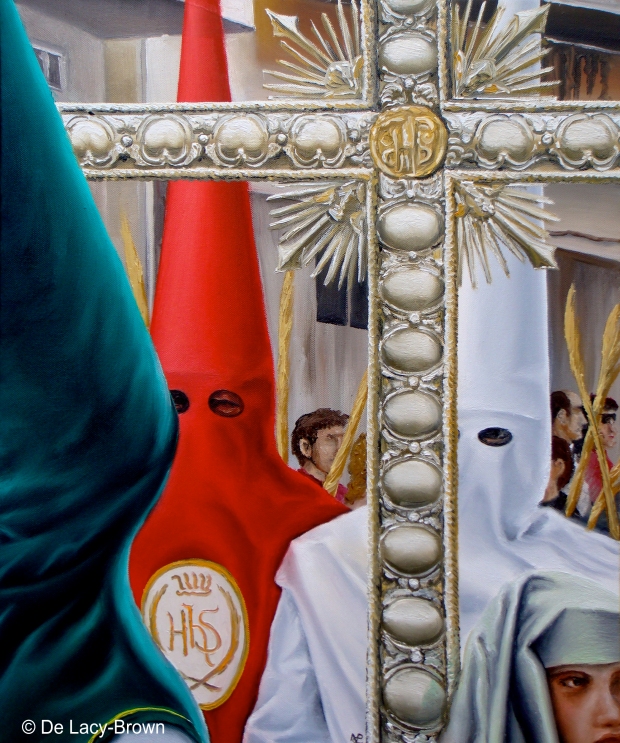 It surprises me that so few people outside of Spain actually know what these processions are. When most English people see my paintings, they think I’ve portrayed the Ku Klux Klan – as if. This observation causes me relentless frustration, and I hope that through my art, photography and now my blog, I can help to share Spain’s Easter spectacles around the world.

That’s all for now. But check The Daily Norm this Easter Sunday, where a special Sunday Supplement will feature my most substantial (and recent) depiction of Semana Santa.