Ahhh as this blog goes to print, I am breathing the air of Paris, the most beautiful city in the world. Paris has no substitute for me. It is the ultimate jewel in the crown of global cultural offerings, every corner of the city exudes architectural magnificence, the Haussmann boulevards are so perfectly laid out that down each road your eyes feast upon one stunning postcard view after another, as the Tour Eiffel, the Arc de Triomphe, the river, the Opera Garnier all come into view. On the streets, the air is crisp and wintery but across the breeze the scent of a magnificent city in perpetual motion fills even the most unwitting visitor with a sense of anticipation. Even the antiquated metro has its own scent of the art nouveau. I adore Paris, from the inherently atmospheric tip of the Butte in Montmartre, to the boutique lined cobbled streets of the Marais. It is a constant inspiration, and I need to visit at least once a year to have my ultimate fill of this stunning city. 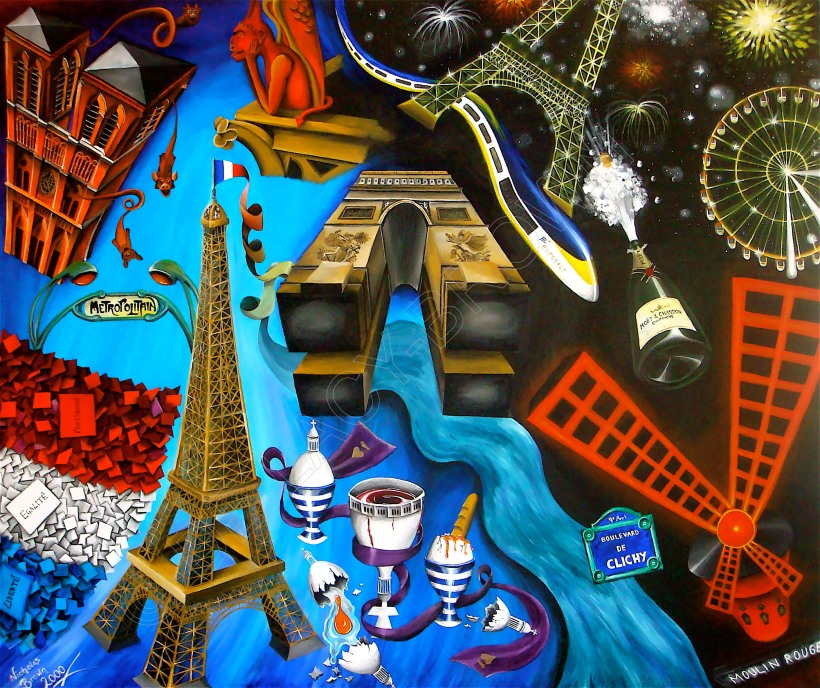 So it’s only suitable then that in this week’s Sunday Supplement, I focus upon the painting which started it all for me when I was 16 – Le Paris Formidable.

This large canvas, which, at 240cm across, was by far the biggest canvas I had ever attempted at the time, is my homage to the wonder of Paris. The idea came to me on a long Saturday afternoon when I was working in a bookshop in my hometown of Worthing. I in fact still have the till receipt somewhere on which I drew an initial quick sketch. The purpose of the work was to paint a spectacle worthy of the great City itself, focusing on the visions and monuments which have made the place so famous worldwide, but to paint those monuments with a slight twist. Thus, in the centre of the canvas, the Arc de Triomphe is seen from the impossible viewpoint of below, as though jetting upwards in a thrusting rocket-like motion. Beneath it, the pearly white domes of the Sacré Coeur are illustrated in the form of eggs, the holy sacrament of bread (a French baguette) dipped into one dome like an egg-soldier, and wine poured into the upturned central dome. The fragility of the broken domes at the foot of the painting speak of the vulnerability of religion in the modern age. Less vulnerable however is the bolstered French flag, proudly pronouncing the motto of the French nation: Liberté, Egalité, Fraternité, while the multi-layered squares of its make-up represents the mixed constitution of the City’s modern-day population. Above the flag rises the iconic art nouveau entrance to the City’s metro stations, while thrusting principally into the canvas is the Eiffel Tower by day, its french flag graduating to form the great River Seine which runs like a spinal cord through the middle of the city. The Eiffel Tower is also represented by night however, and is shown surrounded by fireworks and sparkling like a diamond, representing the hourly light show which was installed into the tower for the Millennium (the year in which this was painted), and has stayed in situ ever since. Also gliding under its arch is the Eurostar, which connected the city to eager British travellers from 1994 onwards. Also in the night time section of the painting glows the infamous red windmill of the Moulin Rouge nightclub, while above it a bottle of champagne pops triumphantly, welcoming in a new millennium in Paris. Finally in the top left is the Notre Dame, glowing a slightly menacing red, the gargoyles which cling to its rafters spiralling outwards and larger than life, playfully enjoying liberté from their usual rooftop constraints.

From Le Paris Formidable painted in 2000, I went on to paint Paris a number of times over the years, and it still continues to inspire me. Catch up with The Daily Norm over the next few days as the blog heads into its Paris Season. In the meantime, here are a few more Paris paintings I have notched up over the years to get your juices running. A bientot!

Engaged in Paris: Charlotte and Ben (2009, oil on canvas)