Paris Part I: Dali, Moreau and the problem of getting a good macaroon. 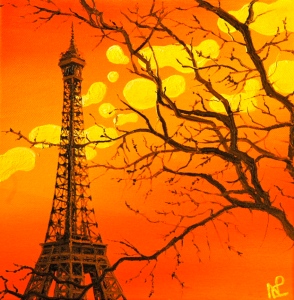 It’s Paris season at The Daily Norm, and here in the City of Lights, Paris pulsates with the buzz of pre-Christmas anticipation, millions packing the shops and the metro, the streets starting to sparkle with fairy lights, and a chill in the air coupled with the occasional waft of log fires from the Marais chimneys indicating that Christmas is close at hand.

But the city is not just readying itself for seasonal festivities. Tourists continue to pack and cram into every irresistible cultural corner, cameras flashing, and queues forming. Yes, those queues have been the bane of my Paris visit so far, curling tirelessly out of every museum, on the metro platforms, out of restaurants, and even to get into some shops! Our primary intention, as we set off yesterday morning, was to visit the Musée d’Orsay, my partner having never seen it before, and myself intrigued by the rehang on an allegedly revolutionary scheme of coloured walls which are meant to enable the impressionist paintings to glow more against their new backgrounds. However as we approached, it was possible to see, even from the Tulleries across the river, the masses queuing before the entrance, these queues snaking way beyond the old railway building and almost onto the nearby bridge.

Deciding to leave the d’Orsay for another day, we headed instead to Montmartre. Again, it was rammed, the droves of tourists almost gridlocked across the Place du Tertre and in front of the Sacre Coeur as they dealt in turn with the approach of over-zealous caricature artists and street sellers, while trying to take photos and suck up the “atmosphere” (because when it’s overrun like this, the atmosphere which is inherent in Montmartre becomes swamped like Disneyland). It was a relief then to escape the masses and head to the Espace Dali, a museum which claims to represent Le Monde Fantasmagorique of Salvador Dali. It certainly provides something of a fantastic, surreal atmosphere, a video of Dali snippets on a loop creating an eery, wordless soundtrack to an exhibition which concentrates on Dali’s superb works of sculpture, furniture and illustration rather than any oil paintings. Which is a frustration. Because in the shop, countless images of Dali’s stunning paintings are thrust upon you, as mugs and mouse mats, jigsaws and so on, but why can I never see those paintings in reality? There are a few in Madrid, a couple at Tate, and his “theatre” museum in Figueres is mainly full of tailor-made installations. So where are all the Dali paintings?!

After lunch in a deceptively oldyworldy brasserie which lacked traditional atmosphere owing to the Michael Jackson soundtrack playing where a French accordion would have added so much, we continued our Montmartre art trail by heading south through the Pigalle district to the Musée Gustave Moreau in the Rue de La Rouchefoucauld. I didn’t know too much about Moreau before going, and I’m not sure I know much more now.

The museum offers an interesting insight into an 1800s apartment, crammed full of memorabilia from the age of the Grand Tour. But of course the real star of the show is the massive two-floored studio space of Moreau which has been hung with countless huge works portraying in multifarious tones and complex imagery a range of subjects of a largely biblical or mythological nature. He is said to be a “Symbolist” painter. I’m not too sure what that means. To me he does not symbolise as much as paint scenes in epic detail. His works seem to shift in style from the old school of traditionalist art painted in the grandiose mode fashionable in the mid 19th century Salon, to a much more rugged, loose, contemporary approach, similar to Chegall or Turner, where the paint is applied so roughly that the canvas looks almost damaged. I found his works, seen as a whole collection, vast walls hung with canvases edge upon edge, corner to corner, a little overwhelming and too detailed for one visit. The one canvas to stand out, albeit packed with fantastical detail, was “Jupiter et Sémélé” which looked more like a shrine to a mythical Amazonian god, with it’s lush jungle plants and strange tribal furniture.

So, having had our fill of art, it was off to do what any Englishman would do at 4 in the afternoon… Seek out tea and, as the typical Frenchman would surely approve, a macaroon on the side. And where better than Ladurée, beloved of all us macaroon fans in London. But upon reaching its HQ on the majestic Champs Élysées, we found a queue bigger even than the one at the d’Orsay! You’d have thought they were giving the gooey macaroons away for free. Sadly not and, already dead on our feet, we returned back to a simpler tea affair in the Marais. The macaroons will have to wait for London.

Following on from my first attempt using “Brushes” on my iPad, my second iPad image appropriately introduces you to French Norm. Ever the stereotype, this Norm is suitably clad in a stripy Gaultier-esk top, beret and a string of French onions and, of course, holds a French stick/ baguette in his single hand. Marvelleux!