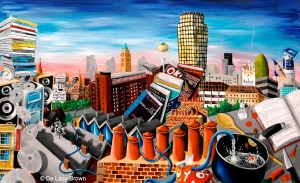 Having recently been voted the top city to visit in the world (as if we didn’t know it already), after last weekend’s Jubilee spectacular and, of course, with the olympics almost on our doorstep, it seems only appropriate that in this week’s Sunday Supplement, I feature one of my paintings which features the city of London as its central theme.

I moved to London ten years ago this September, when I came to study law at King’s College London. I was thrilled when, full of anticipation at what was to be my first day moving away from home in order to start university, I entered my student digs to find this view before me: a perfect vista over London’s south bank complete with the skyscrapers of the city and the tower of Tate Modern, all framing the iconic “Oxo Tower” at the centre. It was as though this room had been chosen for me as an artist, despite the reason for my studies being the pursuit of law. Over that year, I saw this incredible view change over the seasons, as buildings became blanketed with snow, shrowded in a thick mist, and glimmering with the soft hues of pinky golden sunsets and bright midday sun. At the end of my academic year, when my first year law exams were finally over, I imported a canvas into my room and sat down to paint this representation of my view. 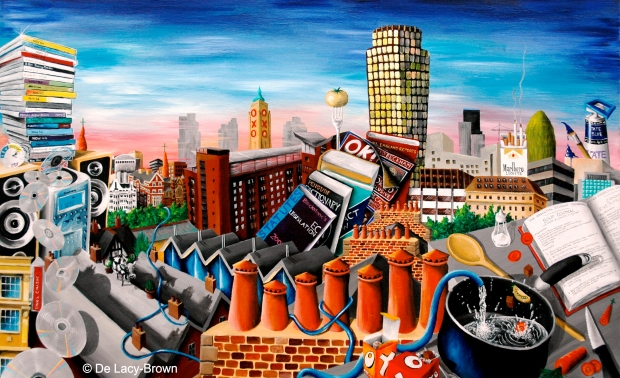 It’s not a straight forward landscape: far from it. Rather I used symbols to represent various landmarks rather than paint them directly as I saw them. The GMTV tower on the left for example was replaced with the stack of CDs which my friends and I were listening to during that year, this being a pertinent representation because the GMTV studios are where so many entertainment shows are filmed. Similarly I replaced the Tate tower with a tube of paint, and one of the large publishing headquarters with a stack of magazines (and a couple of law books to show willing). A predominant theme running through the work is food. This was inspired by the Oxo tower itself, named after the stock cube which, in the days when London’s south bank was a hive of industrial activity, would no doubt have been manufactured at the site. Since these stock cubes are frequently incorporated in soups and stews and casseroles, I started reinterpreting the London skyline as various vegetable ingredients which could then be added to the dish which is being cooked in the bottom right hand corner of the work. Instead of the golden balls on the corners of one south bank building, golden tomatoes take their place; similarly London spires become carrots and Norman Foster’s famous “gherkin” building is painted as just that. Finally, since I could see where the river was, but couldn’t actually see the water itself (owing to buildings blocking the view), I imported the water into the scene with the aid of a very long hose pipe which spirals through the roof tops and chimneys before finally adding much needed liquid into the saucepan on my windowsill. 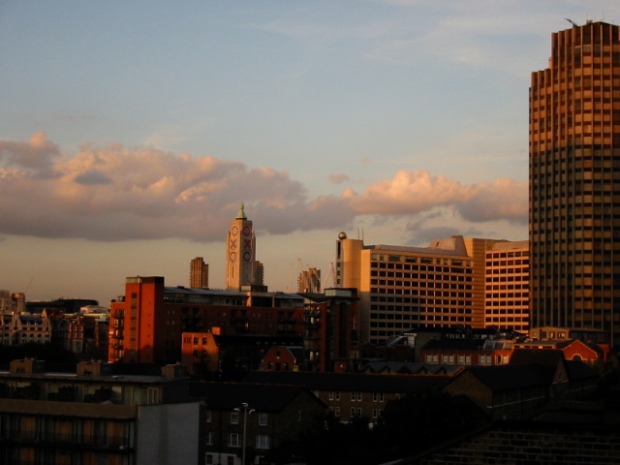 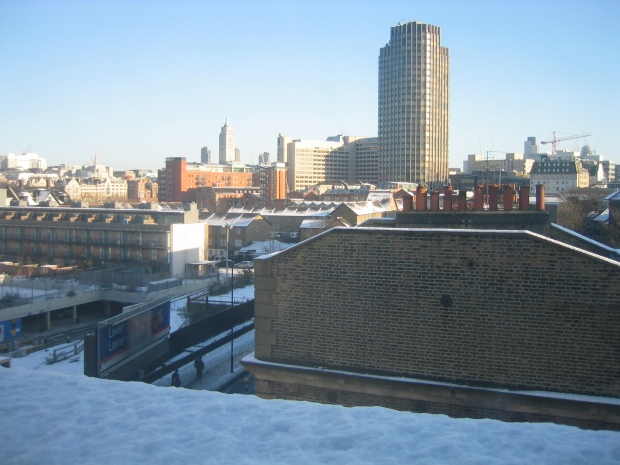 And covered in snow…

So there you have it, one of my most prominent London works, and actually one of my most valuable painting sales when it was sold at exhibition in Mayfair in 2008. Not to worry though – if you like the work and wish you had the original brightening up your lounge, there are limited edition prints of the work available on my main art website, here.

Have a great Sunday and come back to The Daily Norm this coming week for a load of food and art-based posts including the unveiling of my newest painting!