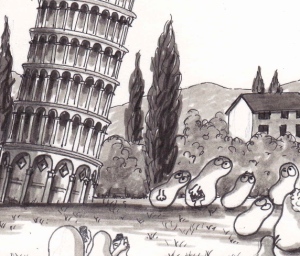 You don’t have to travel far from Firenze to hit the city’s Mediterranean neighbour: Pisa. These days everyone travels to Pisa for one reason – a certain leaning tower, built as the campanile to an equally stunning cathedral and baptistry all situated in the Piazza del Duomo of this otherwise basically nondescript city. The tower, which was built with only 3 metres of foundations on weak sub-soil, tilts some 5.5 degrees and is without a doubt probably the most famous symbol of Italy next to Rome’s Coliseum.

No wonder then that the Norms decided to give the tower a visit on their tour through Italy, but they did not anticipate quite how much the tower leans. In fact, when they stood in the tower’s shadow, they could have sworn that the tower was actually starting to lean closer and closer towards them. As other tourist Norms look by in shock and bemusement, some taking photos, others staring at the unique angle of the building, we are left to wonder, will the tower topple and squash those poor norms under the weight of its colonnaded majesty? Like all good stories, we are left on a cliff-edge at the point of this sketched snap-shot, with the leaning tower still intact to inspire the admiration and incredulity of us all.