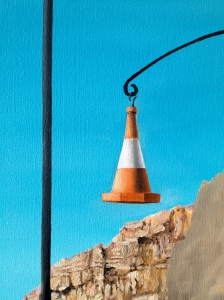 It was a drizzly dull day, the day that changed my life. I was cleaning my windows. I had laboured all day. My newly found art agent was due to visit my flat the next day and I wanted to make a show of it. So I cleaned away, polishing each surface, wiping away a winter’s worth of raindrops from my large sliding glass windows on this mild May day. The cleaning was time consuming however, and it was past 2pm when I realised I had missed lunch. Just a quick break is all it would take to walk along to Marks and Spencer’s, only two doors away, where I could buy a snack.

So out I went, leaving my flat, and walked along the road to grab a sandwich and a drink so that I could carry on my day. I left my now clean windows open, the TV on. I was only going to be a minute.

But I never got that sandwich. And that TV was switched off by the police. 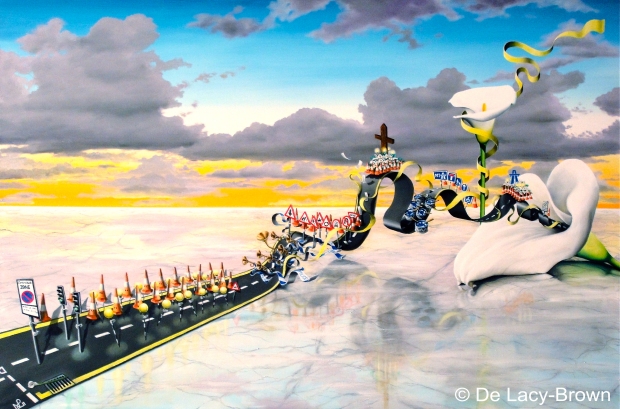 There was a large concrete brick wall next to the building in which I live. Atop the wall, barbed wire prevented trespassers, but also gave the otherwise empty site the appearance of a concentration camp, stark and deserted on the South London skyline. I had walked past this wall countless times, but had never paid it much notice, at least not until that barbed wire cut into my head, like a crown of thorns encircling above my eyes. True, the huge metal gates were occasionally swung open, but were more often closed: the site was used for some kind of storage, and large delivery lorries would occasionally enter and exit the site. There was, occasionally some activity there.

The day that changed my life was one of those days. As I walked past the wall, a large lorry was driving towards the exit. It was heading closer and closer to the wall. But something was wrong. What happened next is something of a blur. It wasn’t a long distance to walk, but as I passed the wall, time seemed to stand still. I will always remember in my mind that enduring image – the top corner of the wall seeming to crumple, like paper, folding outwards towards me. Once I realised that the wall was falling, it was too late. As the masonry fell and the whole weight of the massive 10ft concrete wall started to crash towards the ground, there was no escape. I was already pinned under it.

It’s the loneliness that haunts me. No family, no friends. Alone, imprisoned under a fallen wall. Not knowing whether I would walk again.

I remember the rain. The sickly feeling of a pitter patter around my head. And the stinging sensation. I couldn’t locate it – the signals were all too mixed. But I remember around my face feeling sharp pain, the cold water from the skies, the trickle of blood, the uncomfortable sensation of grit all around me, the numb pain of weight pounding down upon my body as I tried to move.

But I couldn’t move, try as I might. Because my right foot was somewhere around my shoulders – my entire body was twisted in a way that no skeleton was ever meant to withstand. The wall had fallen – the lorry had crashed into it, brought it down as the driver tried to go forwards. He was not, as it was later reported, reversing. This driver was heading forwards into the wall, consciously sealing my fate as he continued in his reckless trajectory towards the road. I never knew why he brought down the wall, what he was doing, what was his excuse. I never learnt why he drove away, leaving the scene of the accident until police stopped him. And I was never given an apology.

Yet 4 and a half years after the day, I live with a mercifully saved leg, a leg pieced together by 7 operations but which must, still, endure the intrusion of a string of future operations still to come. After two years on crutches I can now walk unhindered, but not for long. I cannot run, cannot bend my leg sufficiently to get on a bike. I cannot stretch it fully out, and I cannot lift my toes. I’m forever tripping on my feet, and bemoaning the burning sensation which runs down my damaged nerves. I have to fill my shoes with insoles, and build my heels up to compensate for my now shortened leg. But I survived. And in a way, I’m stronger, as cliché as that may be.

The day the wall crushed my leg was a day that changed my life. I face an uncertain future, but I was given the opportunity, as a 23 year old, to face up to the fragility of life, and now live life to the full.

A traffic cone now hangs on my autobiographical mobile

On my autobiographical mobile, my accident must feature. It’s a Calder-based mobile, and simplicity is the key. So what better way then to symbolise the accident, than a simple traffic cone, a symbol which I have already adopted in my art as a representation of my accident on the roadside, when a heavy goods vehicle brought down a wall and disabled a passer by.

The day that changed my life: My accident, my story.