The culinary bounties of a Christmas Day feast

As the saying goes, the show must go on, and despite news which rocked my family to its core, the most important thing, for me, was to keep the flame of Christmas burning, despite the grief all around. In that vain, I decorated, I cooked and I ate to my heart’s content, and here within are the fruits of my labour (and product of my hefty post-Christmas weight gain)…

A starter of Scallops with clementine, ham, almond and an oloroso dressing 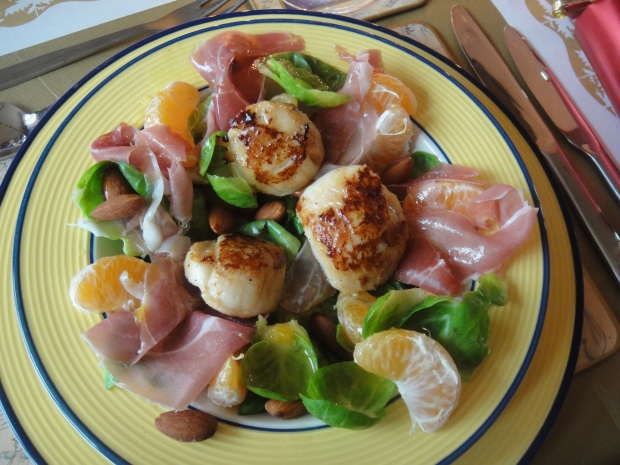 This starter was taken from a recipe by Richard Corrigan in the style section of The Sunday Times a few weeks back. It made for a refreshing, bright and beautifully balanced start to what can often be a heavy Christmas feast, and brought a burst of Spain into an otherwise traditionally dressed English dining room. (Serves 8)

I started by making a dressing for the salad. For this, to the juice of 2 clementines I added 2 tablespoons of caster sugar, 4 tablespoons of oloroso (or other dry) sherry, 2 tablespoons of sherry vinegar, 12 tablespoons of olive oil and a pinch of salt. Setting aside the dressing for now, I peeled the outer leaves from a 750g bag of brussel sprouts (leave the centres for a further sprout dish later) and blanched them in boiling salted water for around 30 seconds before plunging them into iced water to bring out the green and stop any cooking. I then assembled my salad – I broke up 8 clementines and placed these into bowls alongside the drained brussel sprout leaves, 16 slices of torn up parma ham and a scattering of salted almonds.

I then set about frying my scallops (3-4 per person) for around 2 minutes on each side (less if they’re smaller) and placed these atop my salad as the crowning glory. All was finished with my Spanish dressing and some seasoning.

I hadn’t eaten guinea fowl for years until I sampled it again at the wedding of my friend Celia and realised how delicious it is (I believe my propensity not to eat the bird was probably down to my fondness for guinea pigs when I was younger and the inevitable confusion which may have ensued). So, with my two guinea fowl in tow (these should feed 4 easily, 6 at a squeeze), I wrapped the birds in 16 slices of pancetta, enclosing a few sage leaves underneath. Placing the birds in a pan, I then doused the lot in a little olive oil, two ample blobs of butter, 200ml of white wine, seasoning and a few more sage leaves. The birds were then ready to go into the oven at 170 degrees centigrade (if it’s a fan oven, up to 190 if not).

After an hour, I turned both birds onto their breasts, turned the heat down to 150 (170 if not a fan oven) and cooked for a further hour. I should note that I did use foil for around an hour of the cooking to lock in the moisture and prevent the pancetta from burning. However the same effect can probably be gained from regular basting. Once the birds are done, make sure you rest them. I rested them in their pan (covered in foil) for a good 30 minutes which ensured the meat was moist, unctuous and literally fell apart in the mouth.

When it’s all ready don’t forget to use some of those juices to make a delicious gravy. I added mine to chicken stock, a little cornflour to thicken and that was it – the initial wine input makes for a delicious rich gravy.

This is a traditional but ultimately satisfying way of cooking the otherwise dreaded brussel sprouts. Using the sprouts left over from my salad earlier, I sliced these thinly from top to stalk and separated all the layers out to make what looked like a bowl of confetti. I blanched these in boiling salted water for 2 minutes and then plunged into ice water to retain the verdant sparkle of the greens and prevent over cooking. In a pan, I then sauteed 1 chopped onion with around a cup-full of bacon lardons (sorry, I forget how much I used exactly – it was Christmas day after all!). When these were nicely browned, I added back the sprouts, with 1/4 cup of chicken stock, seasoning, and a hand-full of chopped cooked chestnuts (peeled). I sauteed this for around 2 minutes and served.

Ok, this was a major experiment. I literally had no idea what I was doing, but the result was strangely pleasing. In a food processor I whizzed round 250g of wilted spinach, 150g of grated parmesan, 200g of breadcrumbs, 1 egg, the rind of one lemon, 1/2 teaspoon of nutmeg, a dessertspoon of chopped rosemary, a tablespoon of pistachios, a heavy dose of seasoning and a few more chestnuts for good measure. If you follow my mad experiment and find the mix is too wet, add more breadcrumbs. If it’s too dry, add more egg.

Once whizzed up into a green dough, my dear partner rolled the lot into golf ball-sized balls which we refrigerated before popping into the over at 200 degrees for around 30 minutes. The caramalised parmesan flavour of this stuffing is, undoubtedly, delicious.

This unusual potato side accompaniment is so delicious and festive it was the star dish of the day for me – sweet and delicately spiced, it could almost pass for a dessert, but is an unusual and taste-tantalising addition to a Christmas main course. The dish is based on a recipe by Oliver Peyton of Petyon and Byrne restaurants, which have basically taken over the London art gallery restaurant world. The approach below is enough for around 6 people.

I peeled around 1.5kg of sweet potatos and cut each in half. These I boiled until soft and mashed up along with 100g soft brown sugar, 2 teaspoons of cinnamon, 1/4 teaspoon of nutmeg, 2 eggs and salt to taste. Once mashed into a delicious festive concoction, I spooned into a small baking dish and topped with around 150g of mini marshmallows (basically enough to cover the surface). This was a rather time-consuming activity, which again my partner was charged with, but the effect was like a cobbled paving which looked as good as it tasted. 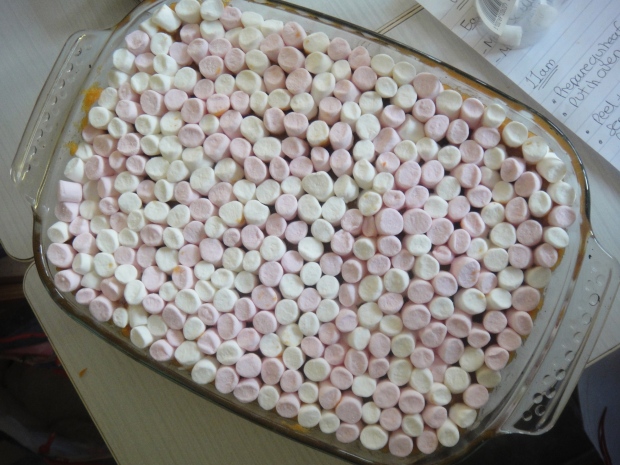 This was cooked for around 30 minutes at 180 degrees. The marshmallows will brown and melt a little making for a wonderful variation on the usual cheese gratin.

I also served with my main a red cabbage and apple side dish, but owing to the fact that I cheated by buying this pre-prepared, I’m afraid I have nothing to add on that front. However for a very good recipe of the same dish, see this one from Waitrose.

I’m not going to go on about my dessert too much being as it kind of collapsed due to overfilling (!) and therefore I did not take any photos of the finished product, but the flavour was so delicious that if you are a more skilled roulade maker than me, you should definitely try it. This is based on a recipe by Maria Ella, and brings an aromatic middle eastern twist to your Christmas meal.

Start with the rhubarb – cut 400g of rhubarb into 4 cm lengths, lay out on a baking tree sprinkled with the grated zest and juice of one orange and 75g of caster sugar. This was roasted  for around 15 mins at 200C and left to cool.

Next onto the meringue – whisk up 4 egg whites until soft peaks form. Then gradually add 190g of caster sugar until thick and glossy. Then carefully fold in 1 teaspoon of vanilla extract, another of white-wine vinegar and another of cornflour, sifted. Spread the meringue on a lined 23 x 33cm baking tray and bake for 10 mins at 200C followed by a further 10 at a reduced temperature of 170C. Remove the meringue from the oven and cool for 2-3 minutes before turning out onto a large sheet of parchment paper dusted with icing sugar. Cool for a further 5 mins before peeling off the paper from the meringue and rolling up lengthways.

Now move onto the cream filling. Place a pinch of saffron in 2 teaspoons of warm water to infuse for 2 minutes. Crush 8 cardamom pods, pass through a sieve and discard the husks. Mix 175g of greek yoghurt and 250g mascarpone cheese with 175g caster sugar, the cardamom, and the saffron and its water. Unroll the meringue and spread the cream over it, adding the rhubarb and 3 tablespoons of crushed pistachios. Then roll back up using the paper to help you. Refrigerate uncovered until required, and serve dusted with icing sugar. 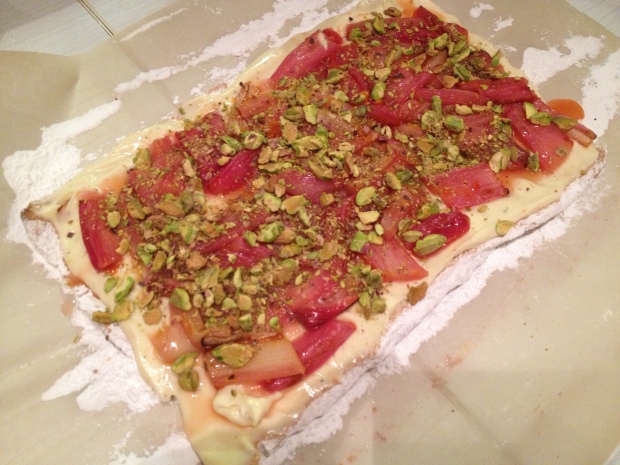 My meringue, pre-rolling (when disaster ensued)

So there you have it. That was my Christmas feast. The best thing about it was that there was plenty left over which, of a Christmas day evening, was perfectly accompanied by a cheese board and my Christmas salad which was basically a colection of avocado, tomato and cucumber (for the festive red and green) and, following the same pattern, a cluster of cranberries and pistachios. 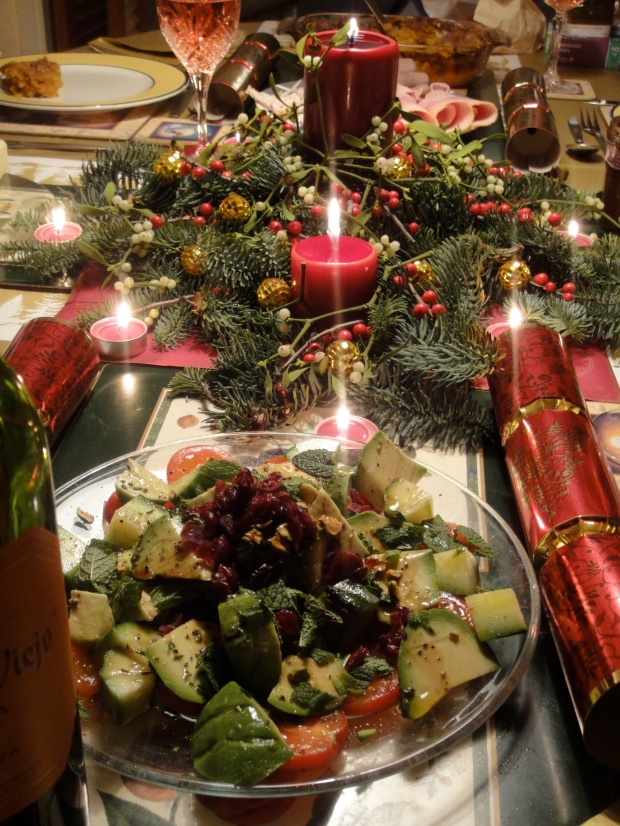 And most importantly of all, the table – mine was centred with a gathering of pine leaves, berries, mistletoe and plenty of glittering candles. It wouldn’t be Christmas without it. I leave you with photos of the table which made for the perfect festive backdrop to my Christmas day feast. 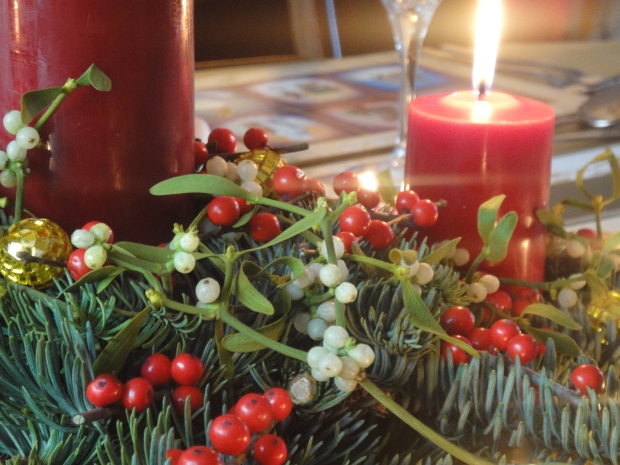