On the Eighth day of Christmas, my Normy gave to me… 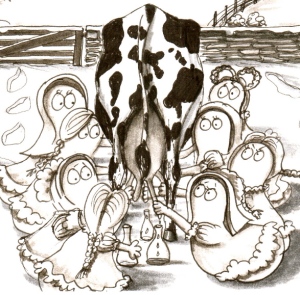 Normy and Normette haven’t had an easy ride as far as Christmas gifts have gone. Ever since trying to emulate the lyrics to the Twelve Days of Christmas in making daily gifts to Normette, Normy has gone from one disaster to the next, what with collie birds flapping all over the place, 5 golden rings which led Normette to accuse him of having an affair, and 6 geese who preferred to lie out on loungers in the Caribbean rather than lay eggs as the carol dictates.

However, for the 8th day, Normy was sure he was onto a good thing. It’s Boxing Day, so it’s unsurprising that Normette, ever the fastidious cook, has run out of milk. It was all of those coffees yesterday, not to mention the custard that all her guests poured liberally over their Christmas pud. However, for today,  Normette wants to make her favourite of all desserts – a Norm-shaped blancmange – a traditional affair at Christmas time for all Norms who like the novelty of eating something as white and bouncy as they are. Imagine then Normette’s disdain that in preparing for the dessert she realised she had run out of milk! And with all the shops around her closed too! But on hearing the news, Normy was suddenly excited – he realised that at last the opportunity had arisen for him to shine and prove that he could give Normette a worthwhile present – for what had he prepared for her 8th Christmas gift? Why, none other than 8 maids a-milking!

Full of excitement, Normy brought each of the 8 maids he had acquired for Normette into the kitchen. Once Normette had unwrapped each maid, she too became excited at Normy’s ingenuity. It was only when she then asked for the milk that Normy realised the error of his ways. He had managed to lay his hands on 8 maids, but he had completely forgotten about the cows! And where on earth would he find 8 cows at this time of the year?!

After many phone calls and several expressions of anger from Normette, Normy managed to find a single cow, and out they trekked, deep into a snowy field, while all 8 milk maids set about milking that poor single cow. But so shocked was the cow at being grappled by no fewer than 8 milk maids at one time that she could barely produce a milliletre of milk. Normette was far from impressed. I wouldn’t want to be in Normy’s household tonight…

Will Normy finally do better on the 9th day of Christmas?