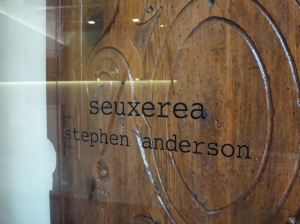 Readers of my blog will know that asides from exploring, photographing and culture-spotting my way around a city, my fourth greatest pleasure of any city trip or holiday is to discover the location’s gastronomic culture. Last year I was lucky enough to sample faultless dinner after faultless dinner in both Spain’s Salamanca and Italy’s Bologna, while in Portugal’s Lisbon, artistically elegant food was served at peasant prices. I would love to follow suit now, in cataloguing my Valencian adventures, and describe dinner after dinner of exciting gastronomic discovery. But I can’t. Why? Not because the food was in any way bad… just because I so rarely got to sample it!

Our great mistake, it appears, is that we stayed in Valencia from Friday to Tuesday. This is a reasonable long-weekend timetable to my mind, but for the restaurants of this city, it’s a no go. So while we had no problem dining out in the fabulous Palo Alto on the Saturday (and would no doubt have dined similarly well on the Friday had our flight not been delayed (*groan*)), Sunday and Monday nights were pretty much a write-off as we found one restaurant after another closed. Now don’t get me wrong, I know that some restaurants like to have a night off (although why they can’t just give their staff alternate nights off and keep the restaurant open daily mystifies me), but two nights in a row?! And this in one of Spain’s largest cities and most popular tourist destinations. 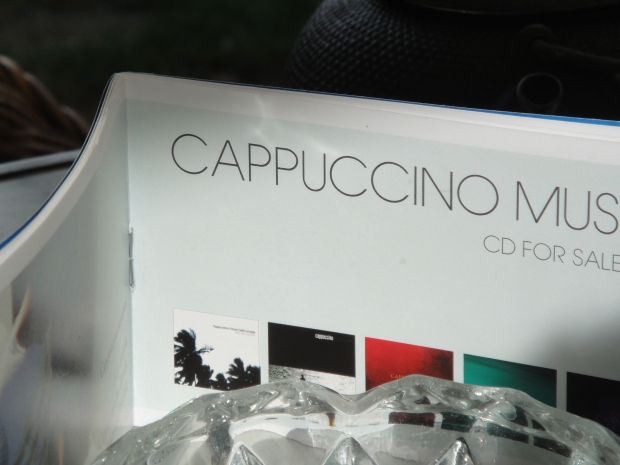 So, on both Sunday and Monday, it was good old Cappuccino Grand Café who cleared up all the diners wandering around Valencia looking lost, the  Mallorcan café chain who clearly have better business brains when it comes to their opening hours. Now don’t get me wrong, Cappuccino are a consistent eat, good service, beautiful atmosphere, even more beautiful staff, but one likes to be adventurous. To do that in Valencia, I had to extend my adventurous spirit one step further than intended, and make my final stab at gastronomic dining on Tuesday lunchtime, just before leaving the city. Luckily for us, this last food experience, decadent in its daytime occurrence, lost nothing for being consumed by day light. Rather, our last hours in the beautiful city of Valencia were spent indulging in a tapas degustacion menu, quaffing upon beautifully selected delicate local wines, and sampling the inexorable delights which come hand in hand with the restaurant Seu-Xerea.

Seu-Xerea is the creation of anglo-burmese chef, Steve Anderson. Favourably reviewed in many a Valencia guidebook, and located in a beautiful old town house just north of the Plaza de la Virgen, the restaurant is a chic, trendy food retreat, which brings to Valenica a fresh, asian twist on Spanish classics, and whose well balanced and elegantly presented food is not overshadowed by an enormous price tag. Rather, for lunch, for 32 euros each plus 8 euros extra for wine (both white and red) plus water and coffee, we were treated to a tasting menu which comprised some 5 starters, a main and a refreshing and indulgent dessert. 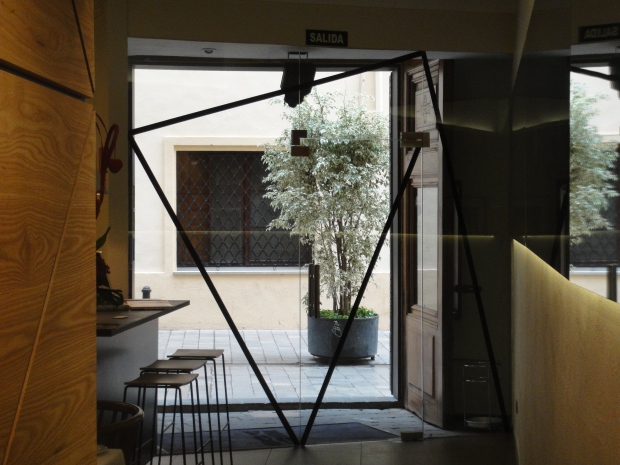 The starters incorporated a panoply of both asian and Spanish flavours in an almost faultless combination of spice, acidity, sweet and sour, all delicately and artistically presented, giving diners visual delights to accompany flavour diversity in every dish. Now don’t get me wrong – Heston Blumenthal this was not, but for a “light” tapas lunch, one couldn’t complain.

Up first was a cream of mussel soup, subtly imbued with saffron, indulgently creamy but not heavy, with a few chives to give oniony balance to the richness of the mussel liquor. Our bouches sufficiently amused, we went on to croquetas of free range chicken. But the name was probably all that was Spanish about these, served with a curry and yuzu mayonnaise, and a kind of pickled shredded cucumber salad, the ingredients of which I couldn’t quite make out, but the freshness of which was undoubtedly welcome amongst the thrilling spicing which the freshly unctuous croquets were duly dipped in.

The tapas starters were on a roll now, as the next dish of artichokes al la romana presented itself before us, the tender heart of the artichoke being subtly flavoured, not like these pickled kinds one buys so often in the UK, thus allowing the creamy centre of this wonderful vegetable to shine through and compliment the accompanying cardamom and tupinambour purée.

Then, heading full throttle down the modern asian route, a satay of delectable juicy fresh kind prawns in a very subtle peanut sauce with vegetables so fresh that they tasted like they had been plucked from a freshly irrigated farm that very morning, and a steamed bread bun with sio bak-style pork belly and hoisin sauce – basically a posh version of the pork buns one can easily munch upon in a dim sum restaurant, and no less flavoursome for its ascension to the tables of the gourmet world. 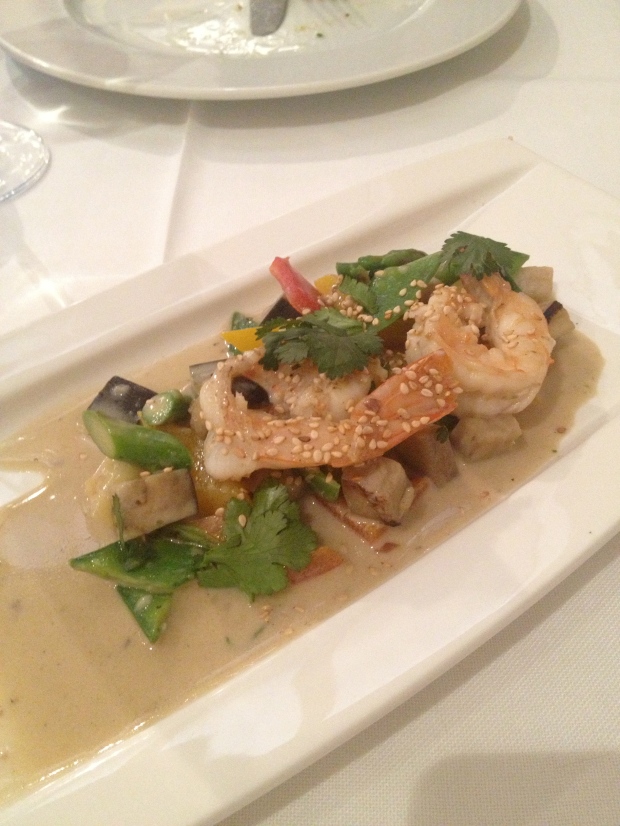 The starters done (and apologies for the lack of/ rubbish photos – I was drinking wine at lunch time after all!) it was onto the mains. There were some three to choose from, and seeking variation on our table, we went for different options. For my mother, a dish of lamb and couscous, artfully concealed within a ball of cabbage and served on a bed of chickpeas. The real winner of her dish was the small but potent helpings of both lemon curd and the super-spicy harissa, the two working in perfect union as a twosome accompaniment to this tender meaty dish. Meanwhile, I had a grilled risotto with mushrooms, Iberian pork and a parmesan cheese broth. This was perhaps the less successful of the two, the grilling of the risotto drying the total dish out somewhat, but I enjoyed the caramelisation which the grilling achieved, as well as the foamy parmesan broth with which the food was lightly fondled.

Dessert came swiftly (it was by this time mid-afternoon and doubtless the popular restaurant was hoping for a break before the dinner stint) and was pleasing both in appearance, quantity and in its zesty refreshing flavour: a pot of passion fruit and white chocolate, this dish benefitted from a much needed contrasting crunch provided by pistachio and what tasted a bit like aerated and dried white chocolate. Best of all, the tart passion fruit cream was broken up with immersed flakes of white chocolate – exquisite. 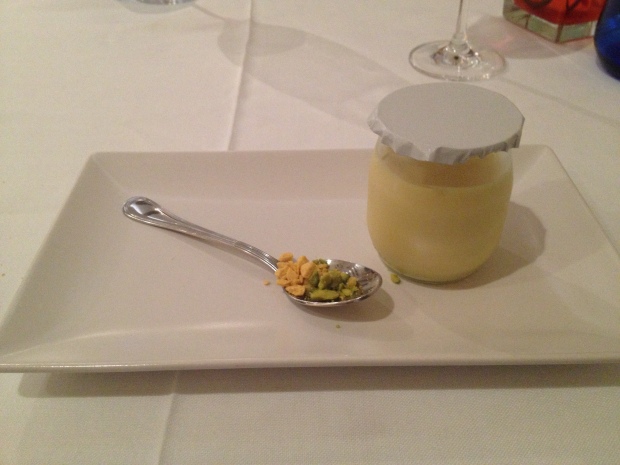 With coffee, our excellent meal came to an end, a few hours of perfect gastronomic sanctuary, with fine Valencian wines helping us to forget the impending return journey back to the UK, and delicious food enabling us to forgive Valencia its almost absurd double-day restaurant closures. But we’ll know for next time…

Seu-Xerea is at C/ del Conde Almodovar, just behind the Plaza de la Virgen. Open for lunch and dinner, but not on Sundays or Mondays!