Composition No. 10 – Cupolas of Kraków

Almost every town or city across the world will have some place of worship at the centre of its community. Very often, a church, a synagogue or a mosque will dominate the town, both in spiritual significance, but also in architectural superiority. In the average Spanish city for example, elaborate bell towers will loom large over the deferential terracotta roof tops of the town below, while even in the highly developed city of London, the globally recognised icon of St Paul’s Cathedral remains at the heart of London’s cityscape horizon. Yet in Kraków, the stunning Polish city with a sprawling, unspoilt historical old town at its heart, you are literally spoilt for choice, such is the array of spiritual icons bursting up all over the city.

While the breathtaking gold-tipped spires of the regal Mariacki church at the centre of the Rynek Główny square and the copper-sculpted embellishments of the Wawel Cathedral are obvious contenders as the city’s spiritual matriarchs, there are so many churches complete with their own flourish of architectural exuberance cropping up all over the city and in between, that the visitor feels almost overwhelmed, literally like a child in a sweet shop full of glistening boiled sweets and sugar-covered jellies. In fact with its turrets and towers, its copper cupolas and its wrought iron domes, Kraków takes decoration to new levels of baroque opulence. Its bell towers are so ornate as to be like multi-tiered wedding cakes iced up with sugar statues of saints, and finished with gold beading and sparkling with jewels; and the use of copper is so prominent in its oxidised green, that for as far as the eye can see, the skyline is splattered by turquoise aqua marines. 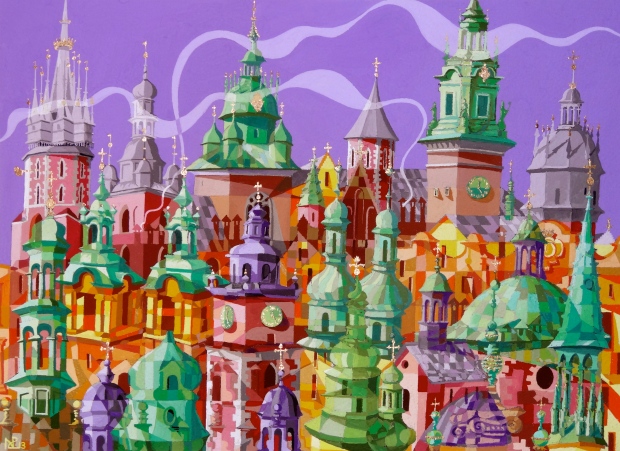 All of this just had to form the basis of the next painting in my “Compositions” series, having already decided that I must surely devote a piece to my time in Kraków. But as far as my gouache paintings go, this one is by far the most complicated. For not only did I want to pack into my Kraków skyline almost every cupola and rooftop which I had so admired in the city (and there are plenty), but I also wanted to follow the theme of my compositions by exploring overlapping objects and cubist interpretations. The result was a piece so complex that in terms of duration, I could probably have completed all 9 of my previous compositions in the time it took to do this one. But with a result so satisfyingly abundant with detail that it compares to the great city itself, I would surmise that the time, and the effort was worth it. Hope you like it!