Many years ago, when I first visited Barcelona, I stumbled upon the idyllic Plaça de Sant Felip Neri in the gothic quarter of the city when I had been visiting the cathedral nearby. I was struck by the beautiful tranquility of the place, created as it was by the gently trickling octagonal fountain across which sunlight was peppered, scattered through the dappled shadows cast by leafy trees in the square’s centre, and the decided absence of tourists, many of whom never find this little tucked away place. Back then I could never have imagined that years later I would be staying in the very stylish Hotel Neri situated on one corner of the square; nor had I any idea that this quiet little square, which has all of the appearance of one of the most serene spots of the city, actually hides the secret of one of the most violent and tragic occurrences of its past.

The only sign that cataclysm once cut through today’s unbroken silence is the deep scarring which can be seen punctuated into the surface of the Oratory of Sant Felip Neri whose entrance stands upon the square. For several metres up from the old pavement, the church’s facade is almost eclipsed by a tide of deep pock marks which comprise the violent scars of one of the most tragic incidences of the Spanish Civil War. On 30th January 1938, Nationalist armies bombed the square. The resulting explosion not only caused catastrophic damage to the fabric of the square (much of which was since rebuilt), but it also resulted in the death of 42 innocent citizens, many of whom were children running for shelter in the Oratory when the raid approached. 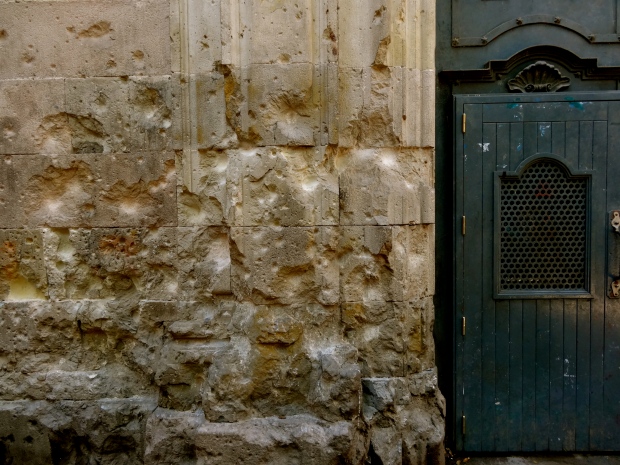 It’s therefore something of an irony that this place of uninterrupted tranquility hides such a devastating history; almost as though it has become a living memorial to that moment of great tragedy. And yet despite the sadness which is broken into the fabric of the square, these deep and unforgettable scars are actually incredibly beautiful to look at, their beauty being perhaps manifested in their power to prompt reflection upon a troubled past, and an appreciation of the peaceful present. With the sun still dappling across the square, it remained one of my favourite places in the city – a place to think, and just to admire. And luckily for me, this time round, I had a hotel room looking directly onto it.

It is therefore unsurprising that during my short stay at the Hotel Neri, I collected a good few photographs of this stunning square, which now become the focus of this post. But before I leave you to those shots, here are two more interesting facts about the square: First, it was to this church that Gaudi was headed when he was hit so prematurely by a tram. Secondly, the square was the setting for a lunch between the protagonists of Woody Allen’s brilliant homage to the city, Vicky Cristina Barcelona, when Javier Bardem’s character accidentally plays “footsie” under the table with Vicky rather than Cristina. Clearly a further excuse to take another look at that wonderful film – as if another were needed.