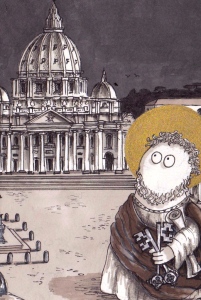 Next up in the continuing Norm Saints Collection is Saint Peter, on whose rock the very foundations of the modern day Catholic church are built. Yes, Saint Peter is the saint we most associate with holding the grand double keys of the Vatican, cloaked elegantly in a Romanesque toga-like getup, with his curly hair and beard all in the Roman vogue. But of course this important Norm Saint was not always so grand. Born “Shimon”, Saint Peter was in fact a fisherman heralding from Galilee. Hence why in so many artistic representations, he is shown with the paraphernalia of his former trade, as is this little Saint norm here.

But later in life, Shimon was to become an integral member of the Twelve Apostles of Christ, and in that role was the apostle who, famously, denied Christ before the cock crowed three times. Hence why in other artistic representations, said cockerel is to be found somewhere round abouts. Sadly for my Saint Peter Norm, the proximity of these representations has made for something of an inevitable conflict, as the recently caught fish spill out of Saint Peter’s net only to be pecked to within an inch of their lives by the rather zealous cockerel standing in wait. Oh well, at least Saint Peter Norm can calm himself in the knowledge that in the background a great church, the Basilica of Saint Peter in Rome, has been built in his honour. Of course historically, the real Saint Peter, who founded the first church of Rome, would never have known to what grandiose extent this church would later develop. But I believe that is the great benefit of artistic license.

I commend to you, Saint Peter Norm. Who’s next?