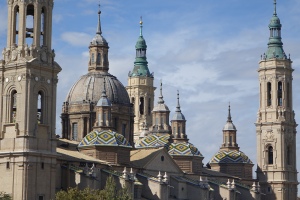 The city of Zaragoza, the 6th largest in Spain and the capital of the landlocked region of Aragon to the West of Catalonia and Northeast of Madrid, has always drawn me with promises of its majestic river setting along the banks of the Ebro (the longest river in Spain don’t you know) and it’s vast Basilica del Pilar, a church so grand they had to give it four bell towers. But because direct flights from the UK are not all that common, and largely involve braving the distinct downgrade to comfort-stripped Ryanair, I had never made it there despite visiting Spain with the same frequency as the changing seasons. But this year, what with it’s being my Mother’s big birthday (don’t worry I won’t betray which one) I considered that it was time to give Zaragoza a go, even if it meant suffering Ryanair’s cushionless cramped flight to get there.

And to be fair to Ryanair, they got us there with the full efficiency of carefully oiled machine, all the earlier then to gain our first views of the much promised Basilica del Pillar which was every bit as stunning as its reputation suggested, as well as enabling us to get a feel for the buzzing electric spirit filling the city. For by sheer coincidence, we happened to be visiting the city during the high point of its annual calendar: the Fiestas del Pilar – 10 days of unrivalled partying, street concerts, traditional costumes and religious devotion. Despite the excitement on the streets, we were keen to sleep after our night time arrival, and all the sooner to wake up to our unbeatable hotel room view: not one, not two but all four of the stunning bell towers of the Basilica del Pilar creeping up from behind the residential street opposite. And as if this scenic view needed to get any more picture perfect, there was even a hot air balloon rising high into the sky besides the great church. What a start to our Zaragoza story! 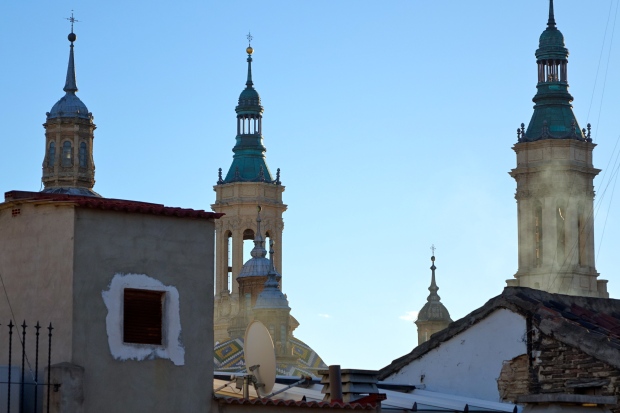 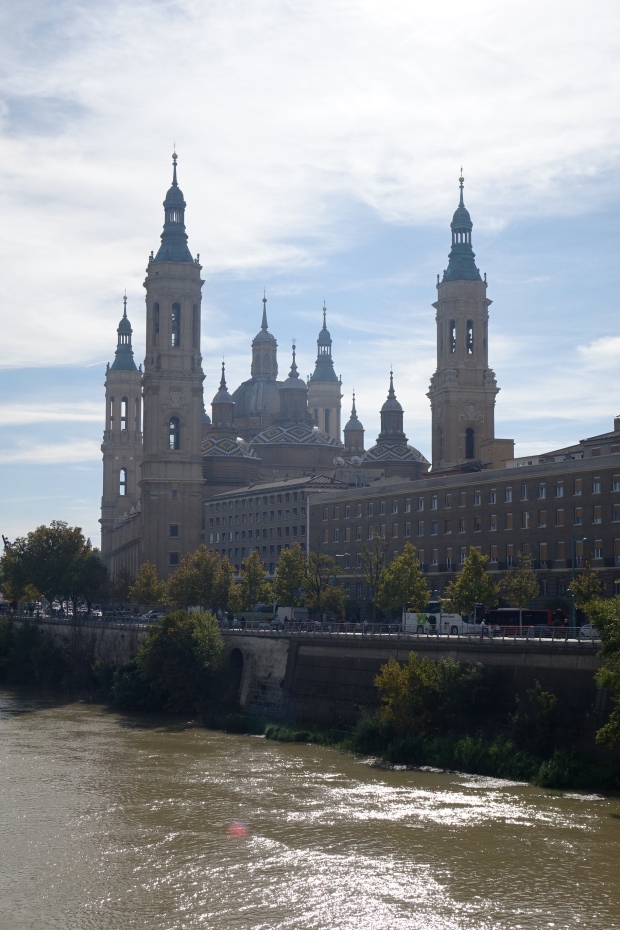 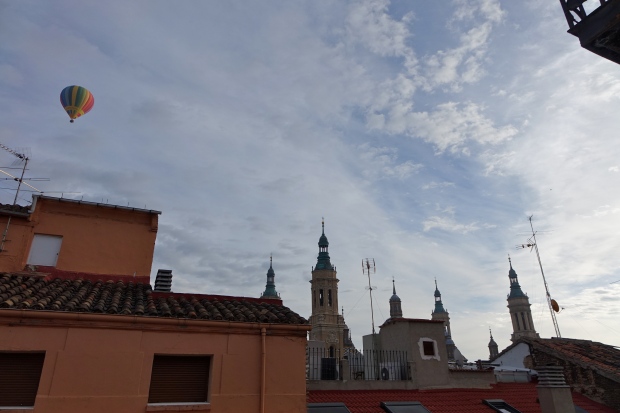 Breakfast did not keep us from seeing the city for long, and walking out into the warm autumn sunshine, we made our way to the Basilica, stopping en route to delight our senses in the local market, where every kind of fruit, vegetable, sweet and savoury treat were on view to delight and entice, although some products were perhaps more enticing than others – I should warn you that those sensitive to gruesome sights may want to look away now! 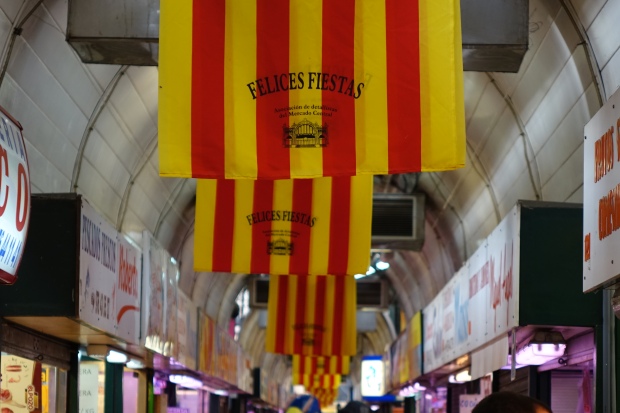 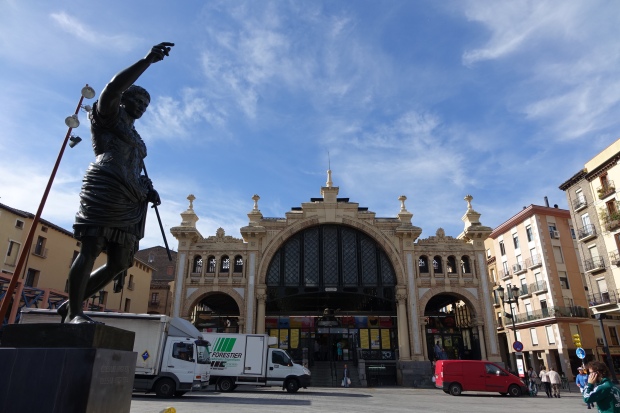 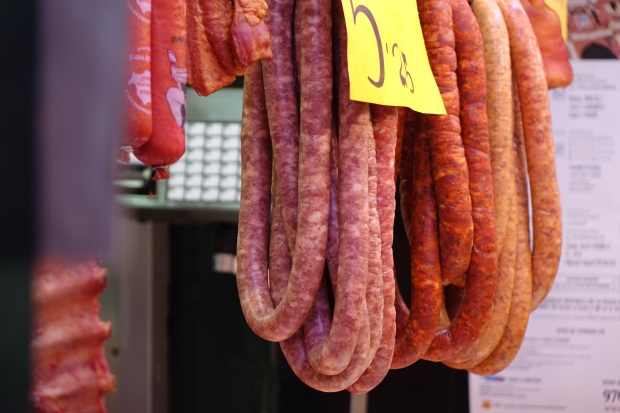 After the market and an amble through Zaragoza’s old town streets, we were able to get a fuller view of the majestic Basilica from the very best viewpoint – across the River Ebro to the gardens which line the riverbank opposite the old town; gardens whose sun-bleached auburn leaves provided the perfect frame for this most wonderful of city views. 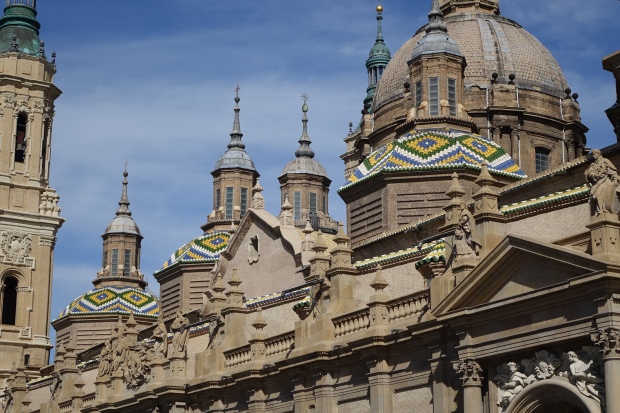 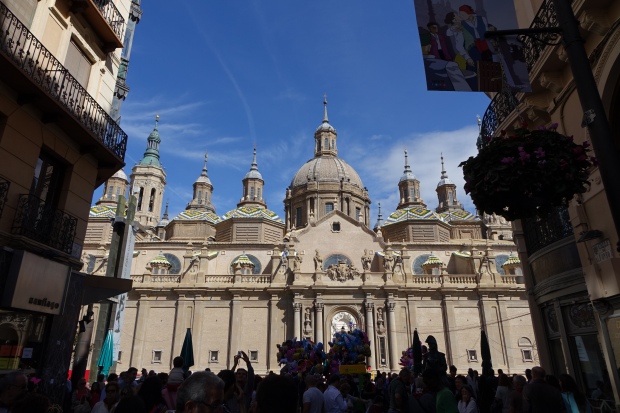 Having satisfied ourselves with the ultimate view of the city, and having enjoyed the basilica from all angles, we soon discovered that the city of Zaragoza, asides from being a city bustling with festivals and containing one of the most architecturally magnificent of all Spanish churches, is also a city of considerable cultural offerings. As we traversed the characterful streets of its old town, we literally stumbled upon museums without having to so much as open our guide book.

The first cultural event we found ourselves wandering into was the exhibition of Enrqiue Larroy – Chapa y Pintura – held in La Lonja. Like many such “Lonjas” in other Spanish cities, La Lonja of Zaragoza is a former merchants hall constructed in a palacial gothic style with soaring ceilings and pillars reaching darlingly up to the vertiginous height of its lofty stone latticed ceiling. But this beautiful architectural site was perfectly set off by the contrasting bright colours of Larroy’s acrylic works, which not only presented wonderfully dynamic, zinging paintings in their own right, but as an artistic installation worked fantastically as they were reflected into the shiny stone floors of this important historical space. 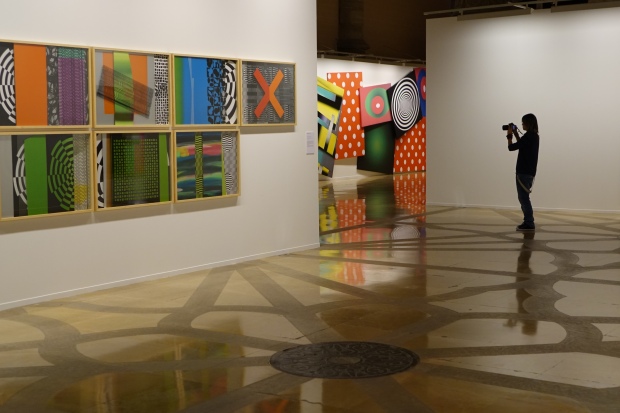 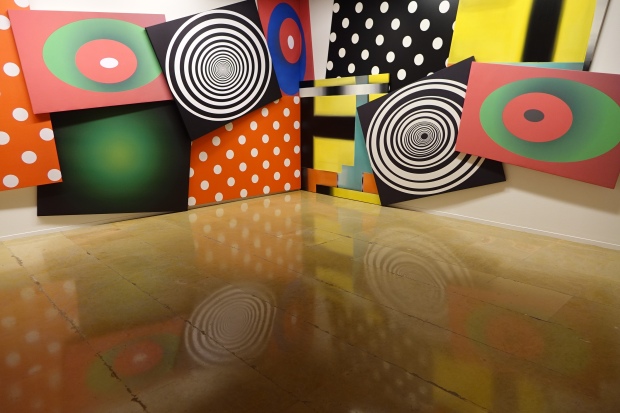 Just up the road from La Lonja is the Museum of local sculptor Pablo Gargallo. Sculpting in the height of the roaring 20s, Gargallo’s work is a wonderful mixture of avant garde figuration and cubism, as the sculptor managed to create three dimensional portraits with only a few hard cast features, allowing the interplay of light and shadow to fill in all of the missing details.As with so many of the art museums I have visited in Spain over the last decade, the Gargallo museum is yet another which is set amidst a stylishly renovated palace, meticulously conceived creating a seamless and highly polished exhibition space.

But having had our fill of art for one day, we found ourselves ending this first day in Zaragoza back where we started – at the magnetic nuclei of the city: the Basilica del Pilar, where excitement for the oncoming festival was tangibly building. Inside the great Basilica, large queues were forming of pilgrims wishing to catch a closer sight or even kiss the pillar on which Mary was supposedly once sighted and around which the entire church was built. Meanwhile outside, huge stages were being constructed in the main squares, people were out dancing in the streets, and more and more visitors seemed to be pouring into the city.

Amongst all this excitement, we took refuge in the charmingly old fashioned Grand Café Zaragoza. Reminding me of Florians in Venice, it provided the perfect sanctuary from the madness on the city’s streets, as well as a throwback to the past which seems to be so prevalent in this city where tradition and folk law is enthusiastically  celebrated. As for us, we ended our day contenting ourselves with our own tradition – a welocme cup of earl grey tea and a chocolate covered palmera pastry: the perfect way to look back and reflect on this first exciting day in Zaragoza.

Tags: Pilar, Spain, Tourism, Travel, Zaragoza
From: Art, Travel
← Late Turner at Tate: Repetitious repertoire with moments of genius
Zaragoza Focus – All the fun of the fiesta →
One Comment Post a comment