The week ends as it begun, with the introduction of another of my new little paintings, created comparatively quickly (that is, in relation to my oil works) with gouache on paper, and inspired by another stunning landscape of the Mediterranean. As with the other works in my collection of “interpretations” which began back last summer on the Amalfi Coast, my landscape of Malaga attempts to simplify the forms of the landscape by stripping out many of the architectural details, while using flat areas of colour to delineate architectural forms and their contrast with the haphazard lines of nature around them. 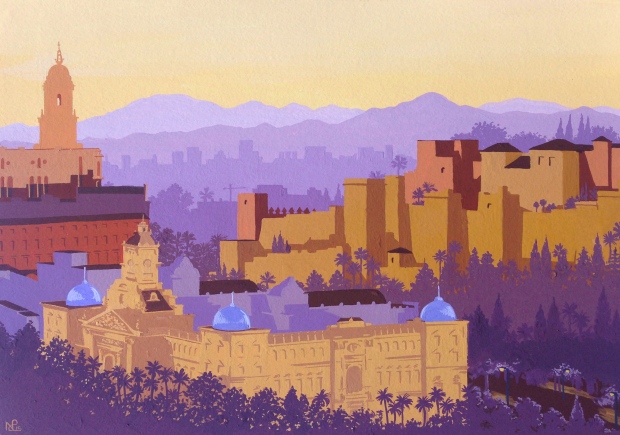 My photos on Wednesday will hopefully help to persuade you as to why the southernmost large Spanish city of Malaga should have brought out the artist within me, and in creating this 15th interpretative landscape, I have attempted to catch the city at one of its most alluring times, when the sun has set to create a golden backdrop to the diverse architectural shapes of the city: from the baroque majesty of the “one-armed lady” (the cathedral) to the simplified robust walls of the ancient moorish Alcazaba palace.