It probably will not have escaped your notice (particularly if you live in the UK) that this year marks 400 years since the death of Britain’s most famous ever playwright and poet, William Shakespeare. And across the country and beyond there has been something of a resurgence of interest in his work. This, together with the coincided discovery of a Shakespearian theatre troupe out here in Mallorca aroused my own Bard reawakening, not least because I have a little anniversary all of my own – some 20 years since I painted, at the tender age of 13, my first ever substantial collection of paintings which just happened to be a scene from every one of Shakespeare’s 37 plays.

So with one thing leading to another, it wasn’t long before I felt old inspirations stir up, and the decision to once again tackle Shakespeare as an inspiration for my art took hold. 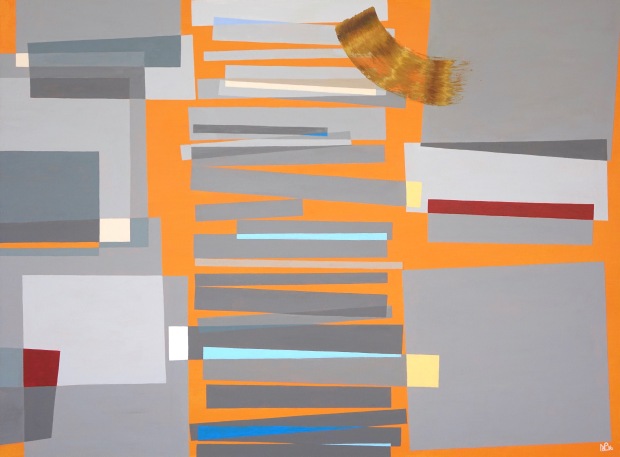 First off the rack is this painting of one of the Bard’s history plays, Richard III. Painted in my new style, interpretative abstraction, the work appears simple but in fact represents the story of Richard III in three clear aspects. First, the three piles of what one could mistake for bricks or books represents, at the painting’s most simplistic visual level, the “III” of Richard in roman numerals. The second meaning is the allusion to the famous scene whereby the Duchess of York (Richard’s mother), Queen Elizabeth (his dead brother’s wife) and Queen Margaret (the previously exiled wife of the former King Henry VI) meet together and bemoan and curse the Machiavellian rise of Richard III to power.

That rise is finally, and most importantly represented by the same three pillars of blocks, each of which depict an important part of the story: The central column is the staircase which tracks Richard’s bloody ascent through the rungs of power to be King, with the slash of the golden crown shining boldly at the top; the column on the right is the Tower of London and in it the two yellow cubes are the two blond princes, the true heirs to the throne who Richard famously kills in the tower in order to clear his path to the crown; and the column on the left, with its overlapping grey forms like medieval armour, represents the Battle of Bosworth at which Richard was finally defeated.

It seems remarkable that some 20 years have passed since I painted my teenage Shakespeare collection, especially now as I rediscover the same excitement which his plays engendered in me all those years ago. Now I’m looking forward to the challenge of finding them again, and painting them afresh (albeit perhaps not all 37…!).