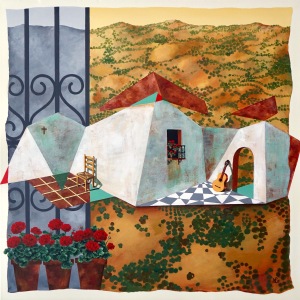 My arrival in Marbella always coincides with a notable heightening in my artistic powers. Something in the air combines with the enveloping heat and the culturally visceral soul of Andalucia to arouse within my mind a flowering of creative inspiration. It’s why, over the years, I have painted some of my favourite artworks in my family’s little jasmine filled garden patio, an open air studio of which the Impressionists themselves would have been proud, and to which I swiftly returned this past summer.

Not even the marked increase of pesky tiger mosquitos could keep me from my canvases, especially since I had two paintings in mind and only 8 days in which to paint them. The first, based on our Marseille trip, I have already shared. But its completion was followed swiftly by a canvas of identical size, marking the Spanish limb of our trip. 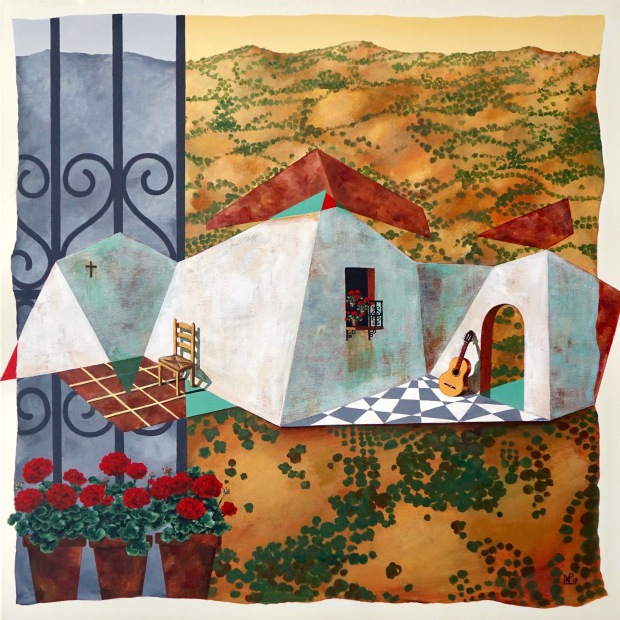 Characterised by the burnt, olive-peppered landscape of Southern Spain, and dominated something of an abstract Andalucian house at its centre, Casa Andaluz is a work which celebrates the essence of Andalucia: its sun-baked white washed walls, the spirit of Flamenco which fills the minds and souls of its people, the religious faith which remains strong in the region, and the deeply ochre, unforgiving but beautiful landscape which underpins the region. With its palette of golden brown and olive green, it is a painting which has the look and feel of Andalucia, with its rough textures and unplanned lines. It is therefore a clear homage to this imperfect region which is, in so many ways, the unbridled soul of Spain.