Christmas is fast upon us, people are rushing around shopping like maniacs, there are now gigantic queues for macaroons at Ladurée on Piccadilly (I thought this madness only occurred on the Champs Élysées. We did however queue for 3 boxes…) and people are allegedly selling Waitrose Heston Blumenthal Christmas puddings for millions on ebay. However something else is in the air in London, and now, scattered across my coffee table and desk, where newly arrived Christmas cards should be taking central place, postcards of the masterpieces of Leonardo Da Vinci are fanned all over, renaissance music replacing carols on the CD player, and an open, full scale catalogue of Da Vinci’s works enables lavish Leonardo indulgence at every turn of the glossy pages. Yes, as promised, I have visited the much hyped National Gallery blockbuster, and now I can firmly pronounce myself to be a huge Da Vinci fan. 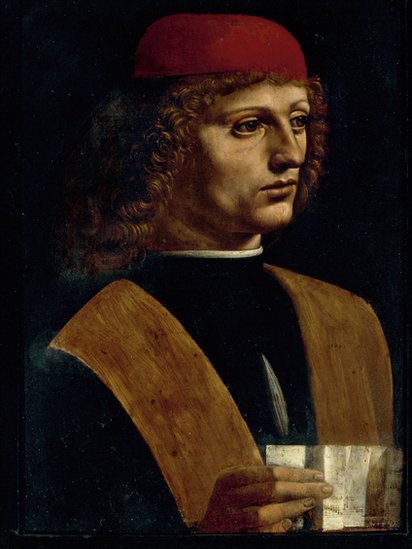 The exhibition, Leonardo Da Vinci: Painter at the Court of Milan, is not, at least to my mind, the exhibition of the decade as some commentators have lauded it. Nothing can quite surpass last year’s The Real Van Gogh at the Royal Academy which displayed a vast collection of mind-bogglingly superb works, nor indeed Tate’s incredibly comprehensive 2005 Frida Kahlo retrospective. It is, however, almost undoubtedly the exhibition of 2011. Unlike the close competitor – Tate’s Miro retrospective – Da Vinci did not go arrogantly off the rails towards the end of his career and start burning canvases or indeed painting them white with a single wiggly black line running somewhere across centre. No, for with the Da Vinci show, we are shown, from one work to another, what an undeniable master draftsman and painter this man was (asides from his various other mathematical, scientific, architectural, and engineering plaudits, to name but a few). Considering, compared to most artists, Da Vinci painted only a handful of works, each and every one is executed to an exceptional standard. Even in their various degrees of preservation, it is possible to see how superbly Da Vinci catches the light on his sitter’s skin, how accurately he has utilised his advanced knowledge of the human anatomy and perfect mathematical ratios to capture the very essence of human expression in his portraits, and how brilliantly, through detailed studies and sheer artistic brilliance, he was able to paint the most perfect drapery, clothing and overall compositional balance.

The paintings on show are far and few between, but we know this before entering. To have displayed 9 of only 15 surviving paintings is a coup for the National, and one can’t really ask for more. Take the Mona Lisa from the Louvre, and it would be like ripping Big Ben away from the Houses of Parliament. However, by reason of their sheer rarity, the sight of one, glowing majestically against a plum painted wall (the lighting is, by the way, very well executed) sends excitement through the audience in the same way that one becomes suddenly star struck when seeing a previous nobody reality TV star in a supermarket (I speak from experience – and no, I am not trying to suggest that Da Vinci’s paintings could ever be considered inconsequential). Then, filling the galleries besides are a great number of preparatory sketches and paintings executed by Da Vinci’s pupils and assistants. However the sketches are far from fillers (much like the use of endless sketches and scientific memorabilia in the recent Royal Academy Degas Ballerina show). Rather, they are crucial to understanding how Da Vinci managed to achieve such polished results, as well as gaining an insight into his thought processes (for example, this wonderful drapery study shows his intention for an altered composition for his painting, The Virgin of the Rocks in its second version, an alteration which, owing to pressure from his patrons, was never actually realised –  the original compositional planning for which can now be seen, using xray, under the paint of the final version). They are also crucial, no doubt, to proving the provenance of the various paintings, all of which seem to have undergone some level of doubt as to whether Da Vinci actually painted them. 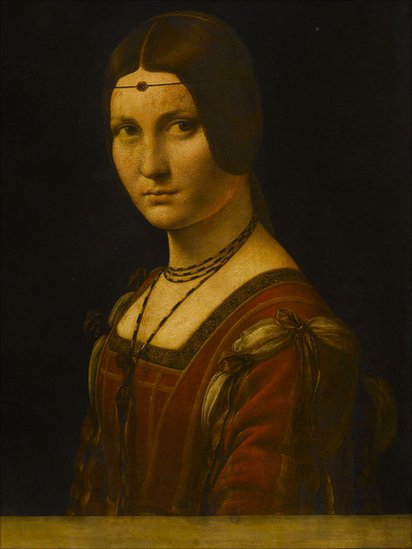 Having said that, the sketches are small, as, indeed, are the majority of the paintings, and, predictably, one does find oneself becoming ever so slightly aggressive in trying to get within a metre’s distance of a work. While the National Gallery has been quite careful to limit the visitors to the show (and the huge queue for the daily released tickets which spirals outside is testament to the Gallery’s strict policy when it comes to letting in too many people all at once) there are still an awful lot of people all vying to have their fill of each and every detail of this show. Thus, I did find that one became unavoidably sucked into a sort of revolving carousel around the various exhibits, so that, like a slow conveyor belt, you could get your moment before a painting before being politely shoved forward by the belly of the man standing behind as he/it got a little too close for comfort. Break off from the conveyor and you would find it difficult to get close to a painting again for a while. And thus my eyes were not so much veiled by tears, as one commentator predicted I would, but rather by the sight of people’s heads. But then it’s alright for the reviewers isn’t it – they get to see the exhibition among only a handful of other critics. No wonder they were overcome with emotion – at how bloomin lucky they were to get the exhibition to themselves! Still, I’ve experienced worse, and for the National it does provide the added bonus that more people will buy the expensive exhibition catalogue in order to actually get a good look at what was on show.

So what was on show at the exhibition? Well the exhibition was broadly split into 7 galleries, each room centralised around one or two Da Vinci masterpieces. In the first room, we met The Musician which is allegedly unfinished, but looks pretty good to me. In the next room, the stunning Belle Ferronniere was hung just across from my favourite, Lady with an Ermine, the two ladies almost competing with one another for who would be judged most beautiful as they had probably competed in life, the lady with an ermine being Cecilia Gallerani, mistress of Duke Ludovico Sforza, and the Belle Ferronnere thouht to have been the Duke’s wife. The Belle Ferronniere is a stunning work, her pose so confident, petulant almost, as though challenging Cecilia Gallerani, whose portrait was literally hung in the direction of La Belle’s gaze, to usurp her role as primary lover to the Duke. Both exhibit truly modern, strongly characterised poses, particularly considering the century in which they were painted.

In the next room, the evidently unfinished Saint Jerome takes centre stage, but even in this state of incompletion, the painting demonstrates how accurately Da Vinci painted the human anatomy. It also proves a useful demonstration of Da Vinci’s working techniques and the stages he undertook in building up layers of paint on a canvas. Moving through into the exhibition’s central gallery, two much larger, more complex compositions are hung opposite one another is a fantastic pairing which is a unique achievement of the Gallery’s show: Da Vinci’s original Virgin of the Rocks, usually to be found in the Louvre in Paris, has been hung with the second version of the same composition, which is owned by the National Gallery. This allows for a direct comparison to be made of the two “rocks”. Personally my favourite was the National Gallery’s later version, where the colours were brighter, and the details more refined such as the little flowers in the foreground. Nonetheless, this version has been recently restored, hence the enhanced colours and more obvious details. 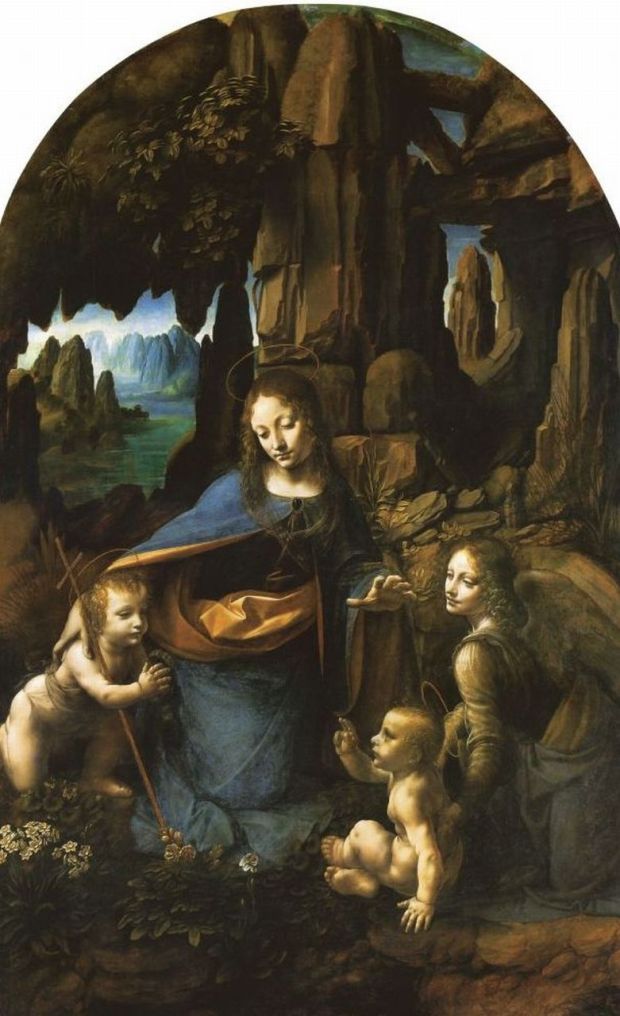 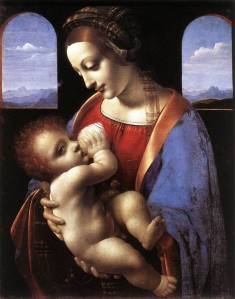 In the final rooms which followed, the focus was given to three further works of Da Vinci. First, the Madonna Litta mother and child which is a reworking of the traditional image of a “Madonna lactans” – that is, the Virgin breast-feeding her child. The extent to which Da Vinci was responsible for the final painting has frequently been thrown into doubt however, not least by the stunning preparatory drapery sketch for the image, made by Da Vinci’s pupil, Giovanni Antonio Boltraffio.

Next was Christ as Salvator Mundi, a painting which has been confirmed as being the 15th discovered painting by Da Vinci, but, fortuitously for the National Gallery, only a few months before the exhibition was put on show. The work has sadly been damaged by repeated and badly executed renovation over the years, and consequently the face of Christ is somewhat lacking in the crystalline brilliance with which Da Vinci has painted the glass globe which Christ is holding, something which, at the time of the painting’s execution, was probably a figment of Da Vinci’s imagination.

Then the exhibition moved onto the so called Burlington House Cartoon (named after its previous home at the building which now hosts London’s Royal Academy), a huge sketch showing Mary, her mother Saint Anne, and the Christ child with an Infant Saint John. This cartoon, only preparatory in nature and unfinished at that, is simply awe-inspiring. The quality of the finishes is incredible, not least considering the lack of colour stimulation or the finish which we would get with an oil painting.

The final leg of the exhibition was, bizarrely, a good 7 minute walk across the National Gallery, up 3 floors, to another of the Gallery’s temporary exhibition sites, to see a focus on Da Vinci’s The Last Supper. Obviously, being as the work is a quickly disintegrating mural in Milan’s Santa Maria delle Grazie, only copies of the work could be shown, and the main thrust of the gallery was more preparatory sketches. However what was very useful to see was a full-scale copy of the mural by Giovanni Pietro Rizzoli which shows Da Vinci’s work in all its original glory which, only 20 years after its original execution, was tragically lost owing to unstable modern methods utilised by Da Vinci when painting the mural straight on the wall. It’s so wonderful to see the work with the precise, multi-coloured detail which Da Vinci intended, rather than the blurred, partially lost, partially covered-by-a-doorway image which is now the hallmark of tacky Da Vinci Code conspiracy theories and hollywood indignities. It even includes Christ’s feet which were chopped off when someone constructed a doorway right through the bottom of the mural. Morons. It’s an impressive spectacle to end the exhibition, but, sadly, a fragmented conclusion owing to that walk across the gallery to see it. By the time you get there, the feeling of slightly stunned excitement into which Da Vinci has lured you amidst his works downstairs has dissipated, and you’re easily distracted with thoughts of how to find the cloakroom again and where to return your audio guide. Back to the real world, unfortunately.

The Last Supper, a contemporary copy of Da Vinci's original, by Giovanni Pietro Rizzoli (around 1508-49)