It’s incredibly close… only one full day to go until all the presents must be finished, the table primed, Nigella Lawson’s guidelines fully digested and memorised, and a tad of Delia Smith guidance absorbed to boot. And, as my preparations also get underway, this post will be my last before the great Christmas festival gets underway. Thereafter, posts may be a bit intermittent until New Year whereupon The Daily Norm will be back for 2012 with gusto!

In the meantime, and by way of a Merry Christmas gift to all of my followers, here as promised is the second part of my Christmas Carol feature, focusing on the seminal sections from Dickens’ great Christmas tale as illustrated by the Norms themselves. Merry Christmas!

The Cratchit family feast upon a pudding 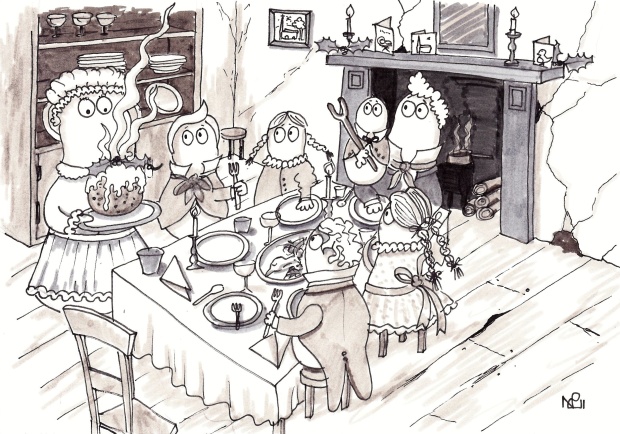 There never was such a goose. Bob said he didn’t believe there ever was such a goose cooked. Its tenderness and flavour, size and cheapness, were the themes of universal admiration. Eked out by apple-sauce and mashed potatoes, it was a sufficient dinner for the whole family; indeed, as Mrs Cratchit said with great delight (surveying one small atom of a bone upon the dish), they hadn’t ate it all at last. Yet every one had had enough, and the youngest Cratchits in particular, were steeped in sage and onion to the eyebrows. But now, the plates being changed by Miss Belinda, Mrs Cratchit left the room alone — too nervous to bear witnesses — to take the pudding up and bring it in.

Suppose it should not be done enough? Suppose it should break in turning out? Suppose somebody should have got over the wall of the back-yard, and stolen it, while they were merry with the goose — a supposition at which the two young Cratchits became livid? All sorts of horrors were supposed.

Hallo! A great deal of steam! The pudding was out of the copper. A smell like a washing-day. That was the cloth. A smell like an eating-house and a pastrycook’s next door to each other, with a laundress’s next door to that. That was the pudding. In half a minute Mrs Cratchit entered — flushed, but smiling proudly — with the pudding, like a speckled cannon-ball, so hard and firm, blazing in half of half-a-quartern of ignited brandy, and bedight with Christmas holly stuck into the top.

Oh, a wonderful pudding! Bob Cratchit said, and calmly too, that he regarded it as the greatest success achieved by Mrs Cratchit since their marriage. Mrs Cratchit said that now the weight was off her mind, she would confess she had had her doubts about the quantity of flour. Everybody had something to say about it, but nobody said or thought it was at all a small pudding for a large family. It would have been flat heresy to do so. Any Cratchit would have blushed to hint at such a thing.

At last the dinner was all done, the cloth was cleared, the hearth swept, and the fire made up. The compound in the jug being tasted, and considered perfect, apples and oranges were put upon the table, and a shovel-full of chestnuts on the fire. Then all the Cratchit family drew round the hearth, in what Bob Cratchit called a circle, meaning half a one; and at Bob Cratchit’s elbow stood the family display of glass. Two tumblers, and a custard-cup without a handle.

These held the hot stuff from the jug, however, as well as golden goblets would have done; and Bob served it out with beaming looks, while the chestnuts on the fire sputtered and cracked noisily. Then Bob proposed:

“A Merry Christmas to us all, my dears. God bless us.”Which all the family re-echoed.

“God bless us every one!” said Tiny Tim, the last of all.

He sat very close to his father’s side upon his little stool. Bob held his withered little hand in his, as if he loved the child, and wished to keep him by his side, and dreaded that he might be taken from him.

“Spirit,” said Scrooge, with an interest he had never felt before,”tell me if Tiny Tim will live.”

“I see a vacant seat,” replied the Ghost, “in the poor chimney-corner, and a crutch without an owner, carefully preserved. If these shadows remain unaltered by the Future, the child will die.”

“If these shadows remain unaltered by the Future, none other of my race,” returned the Ghost, “will find him here. What then? If he be like to die, he had better do it, and decrease the surplus population.”

Scrooge hung his head to hear his own words quoted by the Spirit, and was overcome with penitence and grief.

(A Christmas Carol, Stave 2: The Second of the Three Spirits)

Scrooge faces his future with the Ghost of Christmas Yet to Come (2011, pen on paper, © Nicholas de Lacy-Brown)

The Phantom pointed as before.

He joined it once again, and wondering why and whither he had gone, accompanied it until they reached an iron gate. He paused to look round before entering.

A churchyard. Here, then, the wretched man whose name he had now to learn, lay underneath the ground. It was a worthy place. Walled in by houses; overrun by grass and weeds, the growth of vegetation’s death, not life; choked up with too much burying; fat with repleted appetite. A worthy place!

The Spirit stood among the graves, and pointed down to One. He advanced towards it trembling. The Phantom was exactly as it had been, but he dreaded that he saw new meaning in its solemn shape.

“Before I draw nearer to that stone to which you point,” said Scrooge, “answer me one question. Are these the shadows of the things that Will be, or are they shadows of things that May be, only?”

Still the Ghost pointed downward to the grave by which it stood.

“Men’s courses will foreshadow certain ends, to which, if persevered in, they must lead,” said Scrooge. “But if the courses be departed from, the ends will change. Say it is thus with what you show me.”

The Spirit was immovable as ever.

Scrooge crept towards it, trembling as he went; and following the finger, read upon the stone of the neglected grave his own name, EBENEZER SCROOGE.

“Am I that man who lay upon the bed?” he cried, upon his knees.

The finger pointed from the grave to him, and back again.

The finger still was there.

“Spirit!” he cried, tight clutching at its robe, “hear me. I am not the man I was. I will not be the man I must have been but for this intercourse. Why show me this, if I am past all hope?”

For the first time the hand appeared to shake.

“Good Spirit,” he pursued, as down upon the ground he fell before it: “Your nature intercedes for me, and pities me. Assure me that I yet may change these shadows you have shown me, by an altered life.”

“I will honour Christmas in my heart, and try to keep it all the year. I will live in the Past, the Present, and the Future. The Spirits of all Three shall strive within me. I will not shut out the lessons that they teach. Oh, tell me I may sponge away the writing on this stone!”

In his agony, he caught the spectral hand. It sought to free itself, but he was strong in his entreaty, and detained it. The Spirit, stronger yet, repulsed him.

Holding up his hands in a last prayer to have his fate aye reversed, he saw an alteration in the Phantom’s hood and dress. It shrunk, collapsed, and dwindled down into a bedpost.

(A Christmas Carol – Stave 4: The Last of the Spirits)

Scrooge was better than his word.  He did it all, and infinitely more; and to Tiny Tim, who did not die, he was a second father.  He became as good a friend, as good a master, and as good a man, as the good old city knew, or any other good old city, town, or borough, in the good old world.  Some people laughed to see the alteration in him, but he let them laugh, and little heeded them; for he was wise enough to know that nothing ever happened on this globe, for good, at which some people did not have their fill of laughter in the outset; and knowing that such as these would be blind anyway, he thought it quite as well that they should wrinkle up their eyes in grins, as have the malady in less attractive forms.  His own heart laughed: and that was quite enough for him.

He had no further intercourse with Spirits, but lived upon the Total Abstinence Principle, ever afterwards; and it was always said of him, that he knew how to keep Christmas well, if any man alive possessed the knowledge.  May that be truly said of us, and all of us!  And so, as Tiny Tim observed, God Bless Us, Every One!