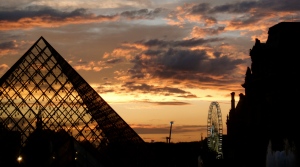 24 hours is not a long time, but when you spend it in the city of light, of love, and of every other superlative you can throw at it, 24 hours is a ripe excuse to live life to the full – Paris style. A birthday is only one day of 365, and yet it is my belief that it should be appropriately marked. After all, don’t we all deserve to feel special for the day? But with London hosting the world’s greatest sporting event, there was no way I could drag myself away from the city for too long for this year’s birthday celebrations. So for a short burst of Birthday happiness, Paris (now so easy to get to via eurostar it feels like an extension of London) was the obvious choice. Here are my 24 hours in that magical city. 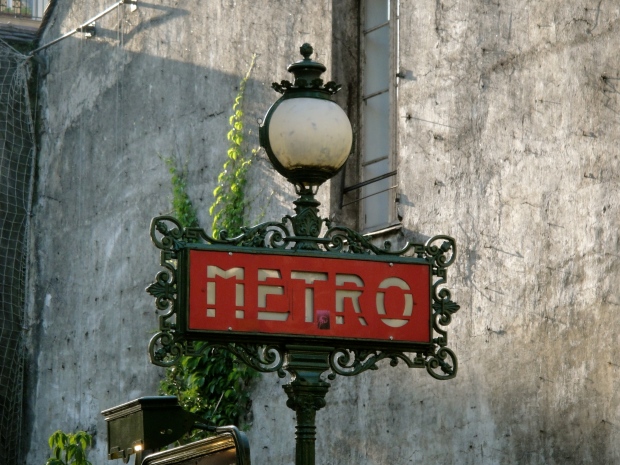 Walking up the steps of any Paris metro station, up onto the streets of the city centre for the first time is always a thrill. Nothing can surpass the architectural splendour of the city, where beauty is consistent from street to street, where Parisians mill from one red-canoped cafe to the next, art nouveau is the design of choice, and a contagion of chic spreads from shop to shopper to every passer by and even to the poodles. After a smooth journey commencing under the huge Olympic rings suspended proudly over the tracks of St Pancras International, to the rather less glamourous welcome of the Gare du Nord in Paris and straight onto the Metro, we arrived at our final destination: the Boulevard Saint Germain des Pres, where, on a small cafe-packed Rue de Buci just round the corner from Les Deux Magots, we checked into our hotel of the same name, where a small but perfectly boutique-chic boudoir awaited us, with perfect views of the street below. 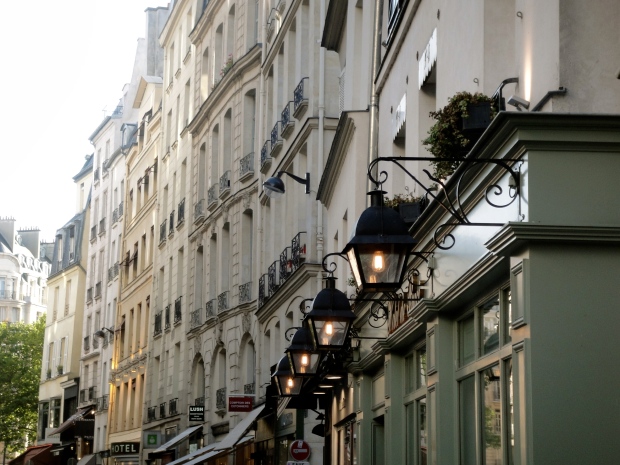 The Hotel de Buci (on the right)

Having made full use of the Hotel de Buci’s elegant facilities, we headed out across Paris, across the Pont des Arts where we were treated to the most spectacular view of Paris at sunset. The sky was like a stracciatella of chocolate rippling clouds across rich layers of rich golden yellows and zesty oranges. When we proceeded through the Cour Carree in the Sully courtyard of the Louvre, the view of I.M.Pei’s glass pyramid with the same, now deepened sunset behind it together with the flashing lights of the Tullleries funfair and the momentous silhouette of the rooftops of the Louvre  was just mind-blowing. Did Paris ever look so good? 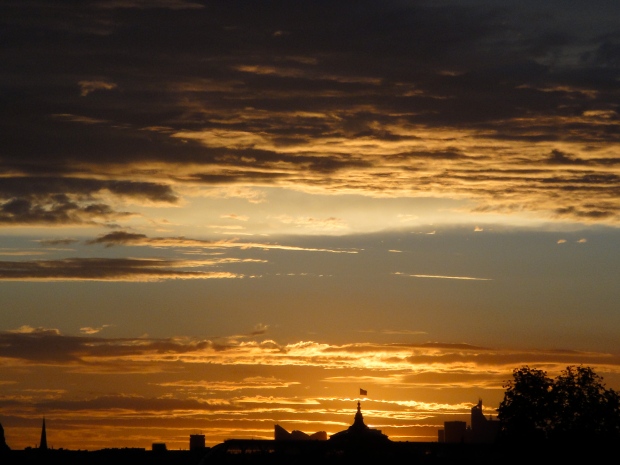 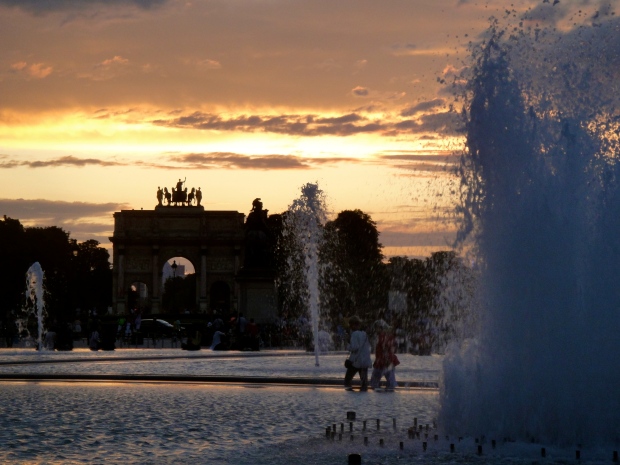 We rushed off towards our late reservation at a previously favourite eatery in Paris: Jean Georges’ Market  Restaurant (Avenue Matignon, 15), just off the Champs Élysées. Past experience of the restaurant had been excellent – a super chic atmosphere, beautifully presented food, largely asian fusion in origin, all served on a tranquil restaurant floor with subdued lighting, meticulous waiting staff and cool lounge-bar sound track. But what was potent chic of a winter’s evening appeared to have been heavily diluted come the summer. Such is perhaps a symptom of Paris in August, when the Parisians flee for the coast, and Paris is left to the tourists. Since trade is passing, the restaurants let their standards slip. And this was certainly the case at Market, where a menu entitled “taste of the summer” offered diners a choice of utterly random dishes for 38 euros per head. Quite asides from the high price tag (which notably hadn’t slipped along with the standards – and don’t even get me started on the wine list) the mix of food was such a hodge-bodge of world cuisines that it was a real struggle to choose two dishes which would actually work together as a meal. Thus you had ravioli on the one hand, and sushi on the other, chicken samosas for a starter, and american hamburgers for after. Controversially I went for the latter combination – and believe me I did not relish the idea of going American while in Paris, when really I should have been supping upon snails and oysters. Nor did I relish the company of the tourists all around me. I spent much of the meal listening to a couple next door talk about the benefit of Tesco clubcard points. Oh mon dieu. To be fair though, the food was good – it just wasn’t worth over 130 euros for the pleasure.

After two hours realising the hard way that Paris in August is a mecca for tourist-tat, we decided that if we couldn’t beat ’em, we would join ’em and headed straight for the Eiffel Tower (via the indubitably chic Avenue Montaigne, lined with the creme de la creme of Parisian high fashion, including, I noted, Yayoi Kusama’s spotty collaboration with Louis Vuitton). The Tour Eiffel is an undisputed tourist icon, favourite of the souvenir tacky-train, splashed across postcards, t-shirts and every other kind of tourist paraphernalia and yet it’s still one of my favourite sights in the city. There’s nothing more magnificent in my opinion that the first view of the vast bulk of the tower when you turn a corner and see the elegant structure rising almost super-human above the nearby overshadowed houses. The sheer audacity of the structure never fails to amaze – how could Gustav Eiffel have ever been so daring as to build something so huge and so utterly alien to the surrounding landscape? It was too late to ascend, but it was surely worth the visit to witness the tower sparkling with several thousand tiny white lights like the world’s biggest diamond at the strike of midnight – what a way to officially start my birthday. Notably however we were not so drunk on birthday spirit that we gave into the relentless approaches of pesky street-sellers trying to force bottles of warm champagne into our hand. Can you imagine anything more lacking in finesse? 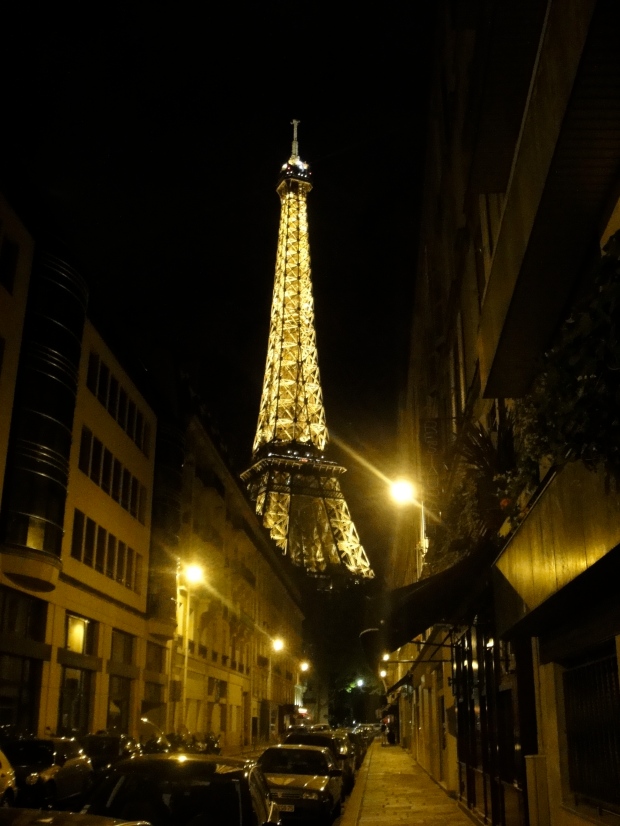 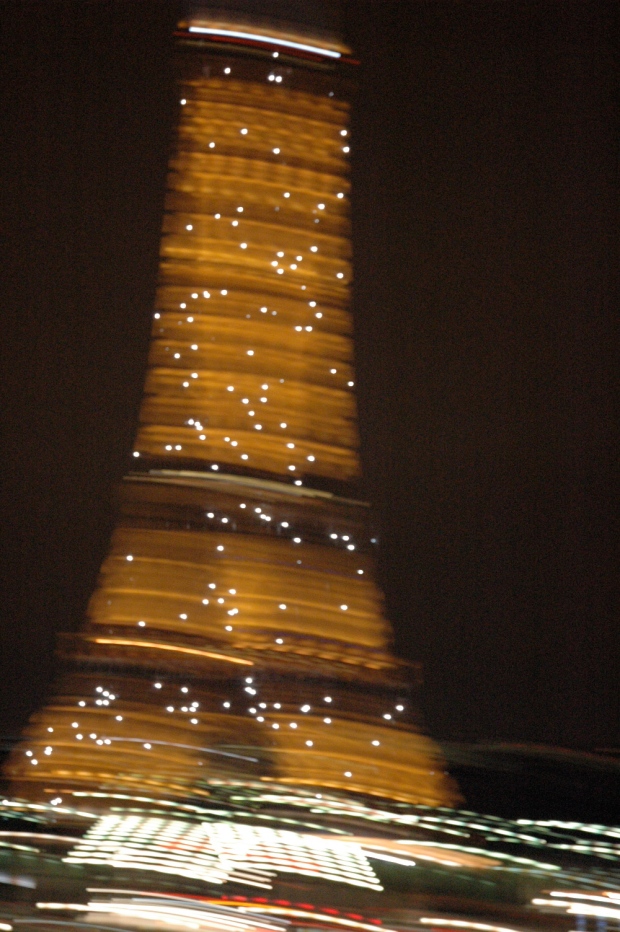 Heading back to the Saint Germain des Pres, I decided it was a good idea to walk from the Eiffel Tower all the way back to the 6th arrondissement – after all, it looks close on the map. Well guess what, it wasn’t, and an hour or so later, with very, very painful feet, we finally made it back to our welcoming soft bed in the Hotel de Buci, where, with curtains open so that we could close our eyes with a moonlit view of the rooftops of Paris, we sunk into a soft sleep, ready and waiting for the daylight to tease our eyelids back open, announcing the start of a whole new day and another bout of birthday celebrations in Paris.

More on that, tomorrow.