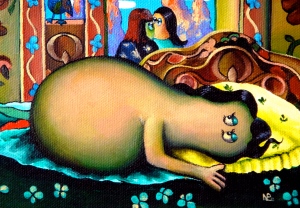 In the same way that an inquisitive child may like playing dress up in the clothes box of his or her parents, so too do the art-loving Norms love to emulate the works of the great artistic masters. In the past on The Daily Norm, the Norms have brought you Frans Hals, Van Gogh, Degas, Picasso, Klimt, Da Vinci and Vermeer to name but a few. Next in line to receive the Norm treatment is none other than the post-impressionist master, Paul Gauguin himself.

Gauguin, master of colour, and leader of the movement out of impressionist naturalism into the more expressionistic unreality, he is famous for his vibrant images of the Pacific island of Tahiti, and perhaps infamous for the rather suspect love affairs he had while on the island, allegedly with underage girls.

It is undoubtedly one such girl who is the subject of one of Gauguin’s most famous paintings, Nevermore O Tahiti, which today enthralls audiences at its home, the Courtauld Gallery in London’s Somerset House. With its striking bright yellow pillow, its richly coloured background, and the mysterious and melancholy gaze of the nude stretched out before us, it has long been one of my favourite paintings, not just by Gauguin, but in the richly constituted Courtauld collection.

It is hardly surprising then that the time would come when I could resist painting a Norm version of this enigmatic masterpiece no longer. So without further ado, I give you, Nevermore Norm…

Nevermore was painted by Gauguin in 1897 in Tahiti, the Polynesian island which the French artist made his home in the latter years of his career. The painting is highly enigmatic both in image and title. Asides from being painted onto the canvas, the title is potentially an allusion to the idea of paradise lost (Milton’s epic poem, with which Gauguin would have been familiar) but more likely refers to the poem by Edgar Allan Poe’s The Raven which Stéphane Mallarmé, a French poet, is said to have recited at the Café Voltaire around the time when Gauguin left Paris. In the poem, a man imagines that a bird flapping at the window repeating the word “nevermore” is the spirit of his dead lover. Hence, perhaps, why Gauguin, in his work, has painted the raven stood on the window sill of this colourful Tahitian room.

As for the rest of the painting, its meaning is less certain. The picture is dominated by a full length reclining Tahitian nude.  Her attention seems to be turned towards the figures and the raven in the background. She appears almost to be listening, bitterly aware that the two are gossiping maybe, or conspiring against her, but unwilling to rise from her repose and confront the pair. But could they, on the other hand, be figments of her imagination, together with the almost dreamlike two dimensional blue sky and yellow clouds, and the patterned walls of her home which feels and looks almost like a temporary stage set?

Whatever the meaning behind this elusive piece, it is characteristic of Gauguin’s pursuit, post-impressionism, not of reality, but of introspection. It was in fact Guiguin’s pursuit of inner vision, rather than external reality which led to his quarrel with Van Gogh in Arles which in turn culminated in the latter’s infamous ear-cutting incident. In Nevermore, we see Gauguin at his introspective, expressionist best, fabricating an image from a sense of unreality, while hinting at the tropical bounties of the lush Pacific surroundings in which he was painting.

While Gauguin’s time on Tahiti has since been revealed to have been littered with sexual controversy and even a defamation wrangle with the governor of the Marquesas Islands, it is certain that the works he produced during his extensive stay on the island are amongst his best. Vivid, exploding with colour, as blue skies, tropical plants and the bronzed tones of his beautiful Tahitian women fill the canvas and make the viewer yearn to leave Europe, and its watery impressionistic landscapes behind forever. That is, in fact, what Gauguin did, dying not in his native France, but in Tahiti, of syphilis, alcoholism and all manner of other health problems. But what he left behind was an amazing collection of paintings which have since served to capture Tahiti in the hearts and minds of art lovers across the world.

Here are just a few to feast your eyes upon… 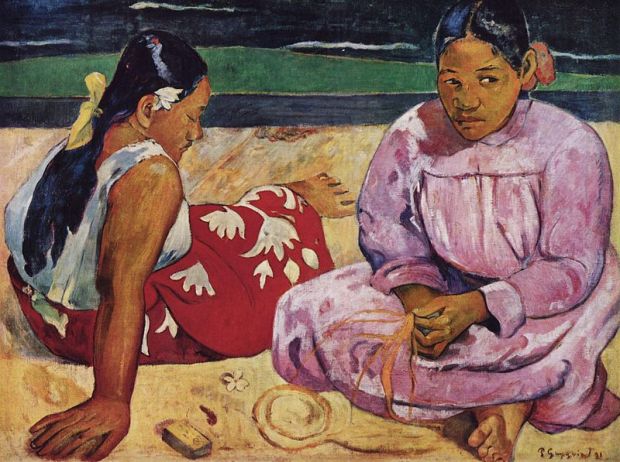 Paul Gauguin, Where Do We Come From? What Are We? Where Are We Going?, (1897) (wikipedia commons)

The question now is, who will the Norms set their sights upon next?