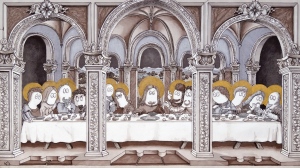 It’s Maundy Thursday, and all over the world Christians will be marking the 5th day in the Holy Week calendar, which is the day on which Jesus is reputed to have held his final dinner with his 12 apostles before his death by crucifixion. It was at that supper, so it is said, that he first broke bread and offered it as a representation of his body, doing likewise with wine, something which has since formed the scriptural basis of the Eucharist (also known as the Holy Communion). It was also at that dinner that Jesus predicted both his future denial (when the cock crows three times…) and his betrayal (by Judas). And it is precisely this moment of universal consternation around the table when the news of his future betrayal is unveiled that Da Vinci portrayed so famously in the most well known portrayal of the Last Supper in the world.

Da Vinci’s masterpiece may be dramatically crumbling away from the walls of the Santa Maria delle Grazie in Milan, but back in Norm-world, the brilliance (and some say significance) of its composition has been apt inspiration for the Norms to re-enact their own version of the Last Supper for this year’s Maundy Thursday celebrations.

Perfectly accompanying the Norm Saints collection which has gone before it, the one arch frame of those renaissance style Norm altarpiece devotional images has been expanded to three arches through which the whole table of the Last Supper can be seen. It’s a happy coincidence that this expansion to three reflects the innumerable references to three (and therefore to the Holy Trinity) which runs through Da Vinci’s original, from the triangular shape of Jesus’ posture, to the grouping of apostles into threes: (from right to left) Bartholomew, James (Son of Alphaesus) and Andrew; Judas (who has spilt some salt – a sign of his betrayal), Peter and “John”; Thomas James (the Greater) and Philip; and Matthew, Jude and Simon.

Of course readers of the Da Vinci Code by Dan Brown will probably know why I have placed “John” in inverted commas; for rumour is rife that the suspiciously feminine features of the apostle to Jesus’ right are actually those of Mary Magdalene rather than John, and that she represents the true Holy Grail, that being the bloodline of Christ. That, says Dan Brown, is the reason why there is no other chalice on the table, and why there is a prominent “V” formed by the empty space between Jesus and this disciple (V is the symbol for sacred feminine). It’s a theory which is reflected in my Norm work with the help of an ever so feminine look to my Norm – or should she be called Normette?

Conspiracy theories asides, reflecting Da Vinci’s great work in this Norm re-enactment was a joy to create and a great addition to my sacred Norm collections of late. But there’s something even more special on its way tomorrow. 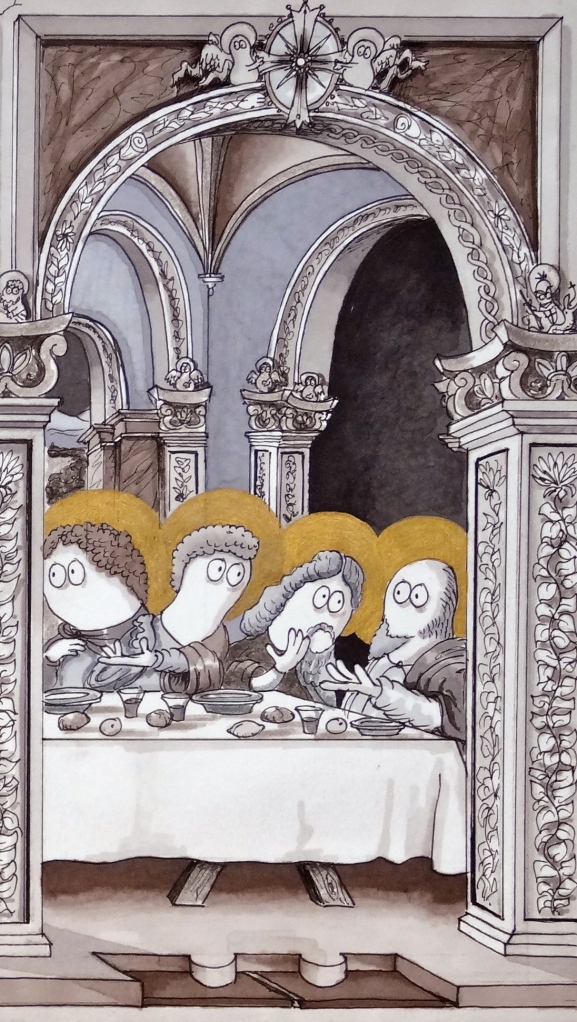