There is something inherently romantic about making a European journey by train. For what you may gain in time by way of flying (IF things are running on time) you surely lack in the kind of convenience promised by a railway journey, which, with very little check-in hassle, sweeps its passengers to the very heart of their destination in a single fast-moving trajectory. And it’s not as if trains even take that long these days, with a sophisticated network of high speed trains spreading over Europe and growing every year.

So when I considered a holiday destination for this summer, my decision was very much influenced by the ease with which, during the summer months, one can catch a Eurostar from London St Pancras direct into Avignon in the heart of French Provence in just under 6 hours. And as we were to find as we took said train early on the penultimate Saturday of June, the length of the journey literally flies by as one is immovably distracted by the slowly changing French landscape outside the window, and lured by the ripe promise of long hot sunny days and floral scents of the Provençal promised land. While a flight may whisk you above the clouds and deliver you from one mediocre out-of-town airport space to another, the Eurostar option affords you the unique opportunity to see a country literally change, at speed before your eyes. 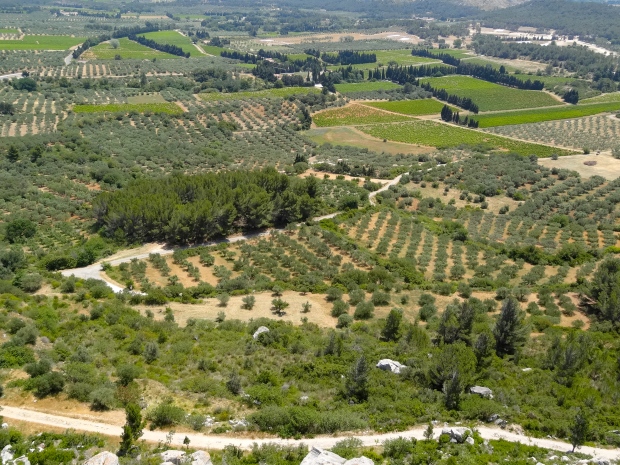 And so it was that as we began our Provençal Odyssey we watched with wonder as the grey flat lands of Northern France became progressively more undulating, and colours literally ripened before our eyes, with clearing skies, the reappearance of sunshine and finally the much promised shots of purple emanating from a tapestry of lavender fields which cultivate the region. As the purples and yellow and bright greens increased it became clear that we were nearing our destination, and when the train began to slow over the sparkling snaking form of the river Rhône in view of the nearby silhouette of a majestic medieval citadel, we knew that we had arrived: in Avignon. 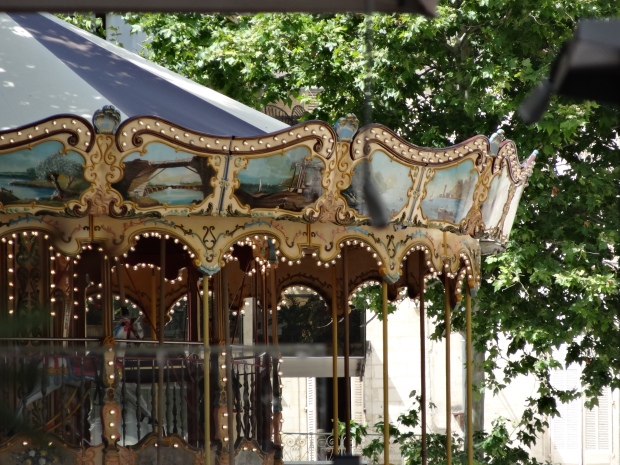 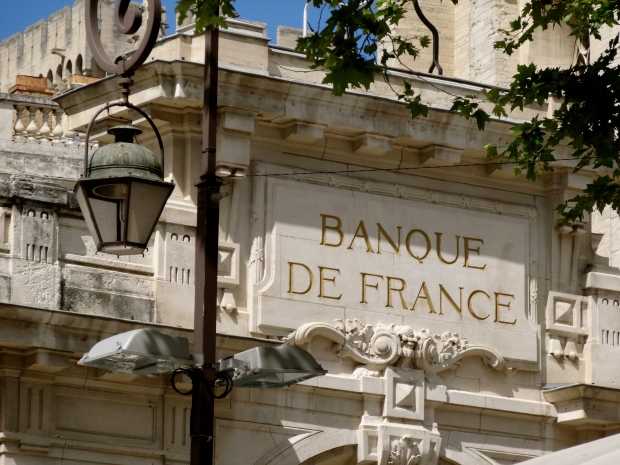 The guide books will tell you that Avignon is the gem of Provence and that much became very clear as soon as we entered the tightly walled old city centre. For Avignon’s unique beauty arises from its equally unique history, characterised by the period when, in the 14th century, the Papal enclave fled the turmoil of savagery in Rome and set up a new capital of Catholicism in Avignon. The result of a line of 9 Avignon popes (2 of which ruled in tandem with a duplicate pope back in Rome during the time of the Great Schism) is a city made great in medieval times: surrounded by dense barricaded walls in order to protect tv the Papal city, within which a quaint maze of winding narrow streets all leading to the central magnificent heart of the city: the super-imposing Papal palace itself. 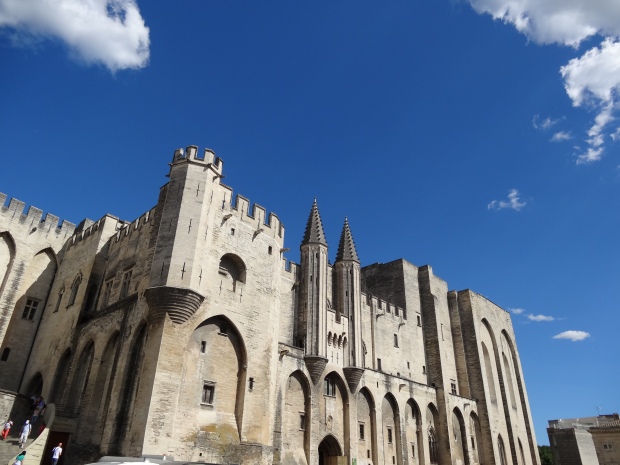 Of course the city has developed since then, and the city’s Hotel de Ville facing outwardly onto the bustling restaurant filled Place de l’Horloge is a grand testament to Neo-classicism. However there are very few modern scars on this UNESCO protected heritage site, and our hotel, the Hotel Horloge was situated right in the middle of it.

Delighted at our first glimpses of the city, by our location at its heart, and by the heat pervading its squares and streets, we rushed out into the city, pulled by the cafe bustle of the Place de l’Horloge and the promise of a chilled glass of wine after our railway trek from one end of France to the other.

And the park affording views across the city

Ice cream in the park 🙂

Already drunk on the sheer beauty of the city, and now Dizzy with the delights of a little afternoon wine, we were close to being hyper with the magnificence of the city we saw before us. From that first glimpse of the imposing and almost fairy tale like Papal palace, and the golden Mary looming over the city, to our discovery of a pretty shady little park, the Rocher des Doms gardens, set up on a hill next to the palace. From these gardens, full of families picnicking, playing, children peddling around on old fashioned horse carts and young couples sipping coffees and eating ice cream by a duck pond, our first views were afforded of the famous Pont d’Avignon (real name: Pont St Bénézet), renowned because of the eponymous rhyming song (sur Le pont d’Avignon etc) but today a mere relic of what it once was, reaching out into the Rhône but now, a ruin, resolved to never quite making it more than halfway across the wide expanse of water.

As if further validation of the magic of the city were needed, one event after another occurred as the day turned into night, confirming Avignon to be a true reflection of the good life: First a wedding party, dancing their way to middle eastern music through the town, the crowds of tourists joining them in their merry parade; second the long shadows cast upon a building’s magnificent decorative facade as the sun shone its day’s final rays across the exquisite architectural details; third: dinner – a rich French feast of aubergines in tomato sauce, delicate sea bream, and a cookie pannacotta for dessert enjoyed by candlelight before the pinkening facade of the Palais des Papes at sundown; fourth that same sunset over the Pont d’Avignon, the pink light reflecting off the calm waters of the Rhone; and finally, in the main Place du Palais, an open air concert from which the harmonious melodies of orchestra-accompanied opera filled the warm evening air and bounced off the vast medieval walls of the Palais des Papes behind it. 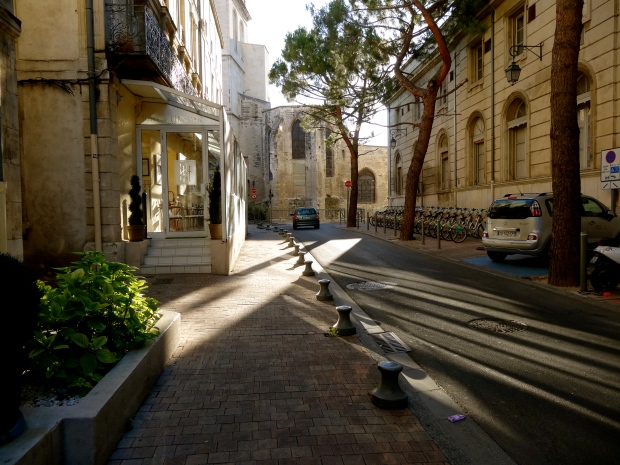 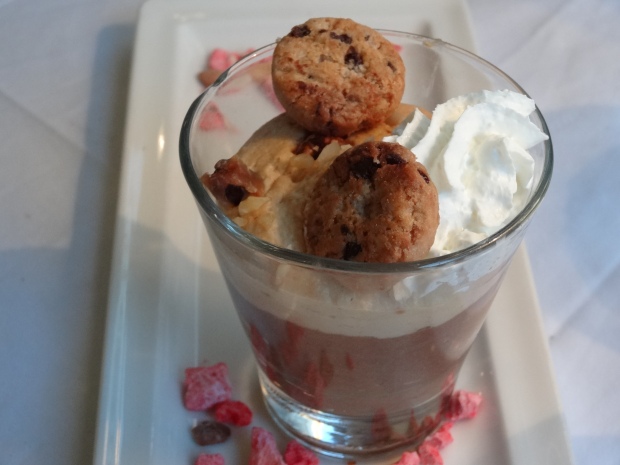 What a city! So rich in its offerings, and providing us with such sights and sounds after only a few hours’ visit. From London to Avignon, our experience of life had undergone a perceptive change. We had found ourselves in the warm, spirited and culturally enriched city of Avignon, and as darkness fell, we could do little else but head to bed full of excitement for the days that were to come, and the opportunity that would be afforded to explore this Provençal gem to the full.

More about that, tomorrow. See you then!