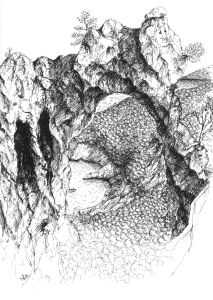 The Arco Naturale in Capri is one of those sights which just takes your breath from you, propelling it into the atmosphere is a shower of fireworks. For there is nothing quite so stunning as the unexpected, and this mighty towering limestone arch looked so deliciously precarious as it balanced several hundred metres above the turquoise sea below that it felt almost like a stage set. There was something almost arousing about its huge teetering mass, thrust upwards into the blue sky like a declaration of robust resilience in the face of nature’s cruel seas; its hardy mass a swollen emboldened spectacle rising above the battered cliffs and sumptuous plant life besides it to frame the surrounding landscape with its gravity-defying arc. And despite the fact that the little pathway skirting alongside this awesome sight was something of a vertiginous spot, with a sheer drop right below it, I could not resist swinging my legs over the side and getting out my sketchbook to capture the impressive prospect before me.

So my fourth sketch of the Amalfi Coast trip was not made without risk, and although my legs were firmly curled around the railings above the cliff edge, I could easily have dropped my pens, or even my beloved sketchbook down that sheer drop – goodness knows how I didn’t. And it wasn’t like I didn’t have distractions – my sketching attracted not just the attention of fellow tourists, but also a dear little cat who curled around me, rubbing itself against the hard edges of my sketchbook, and at times appearing to teeter horrendously closely on the knife edge of the cliff-edge, its perfectly balanced slender body somehow nonplussed by the drop just below. But as you can see, my sketchbook lived to tell the tale – and indeed to be shared, on today’s Daily Norm.

Now that’s what I call an artist’s studio…